Six decades after a deadly plane crash into a Virginia mountain near Charlottesville, a piece of Piedmont Airlines Flight 349 was returned to the site.
(1/3) 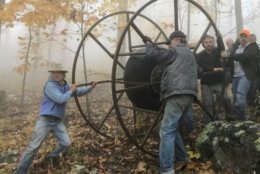 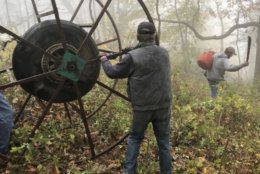 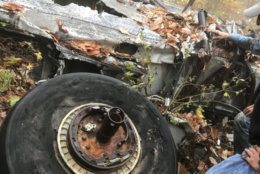 Just over 60 years ago, on Oct. 30, 1959, Piedmont Airlines Flight 349 took off from what was then known as Washington National Airport, bound for for Virginia’s Charlottesville, then Lynchburg and Roanoke.

“It never made those stops that night, because it slammed into the side of Bucks Elbow Mountain in the dark and fog,” said Charlottesville-based reporter Hawes Spencer.

“Bucks Elbow Mountain is about 15 miles west of Charlottesville — it’s part of the Blue Ridge, right next to the Shenandoah National Park, and it’s extremely steep and extremely remote.”

When the DC-3 plane, powered by two propellers, with a crew of three, and with all of its 24 passenger seats filled, crashed into the mountain, near the Virginia town of Crozet, in Albemarle County, nobody knew where it was.

Years before commercial airlines were tracked by radar, and before the invention of black boxes, the search for the plane was intense.

“A fully-loaded DC-3 lost within the confines of the continental United States — there’d been nothing like it. It was gone from Friday night at 8 p.m. and wasn’t discovered until Sunday morning, around 8 a.m,” Spencer said.

But there was one survivor.

“Twenty-four passengers got on in Washington, and the last one who got on snagged the last seat at the back,” said Spencer. “And, for some reason, that passenger, a man named Phil Bradley, who was heading home to Clifton Forge, Virginia survived the crash.”

Like all the other passengers, Bradley was still strapped to his seat when the plane’s fuselage ripped open. He suffered a severe hip dislocation.

The investigation by the Civil Aeronautics Board — the predecessor to the National Transportation Safety Board — concluded the crash was caused by pilot error, after failing to make the one and only major turn from Washington to Charlottesville.

“The Air Lines Pilots Association conducted an investigation of its own, and determined that the more likely scenario was that the homing beacon in Charlottesville had faded out, and the plane had fixed on a beacon in Hagerstown, Maryland, which put it on a collision course with Bucks Elbow Mountain,” said Spencer.

Little evidence of the deadly crash remains on the mountain.

“I first visited the site as a Boy Scout in the 1970s, and there was very little wreckage left at that point because scavengers had grabbed most of it. You would hardly even recognize that it’s a plane, except there’s a lot of aluminum [fuselage] skin up there.”

“It’s on private property, but permission was granted last week for the people involved in an operation to come,” he said.

Spencer was present as a wheel from the landing gear of Airlines Flight 349 was returned to the site.

“The wheel had been scavenged from the wreck, and had laid in someone’s garage for many years,” said Spencer. “Then sculptor Mark Cline acquired the wheel by trading a couple of fiberglass sculptures for it.”

Cline quickly realized he wasn’t comfortable owning the wheel from the doomed airliner.

“He felt he was holding onto something that didn’t belong to him, and that it was a piece of history that belonged to the site,” Spencer said. “So, he led the expedition to return the wheel to the site.”

Sixty-years to the day after the crash, a group of a dozen people, led by Cline, rolled and carried the heavy wheel down the mountain, using machetes to clear a path,  “and laid it at the fuselage, or what remained of the fuselage of the fallen plane,” Spencer said.

Cline told Spencer he had promised Bradley, who died of pancreatic cancer in 2013, that he would integrate the wheel in a memorial to those who died in the crash that he survived.

“It was emotional for many who were there, including a nephew of one of the victims,” Spencer said. “And as they started back up the mountain, dense fog and a steady rain was falling, just like it was 60 years ago.” 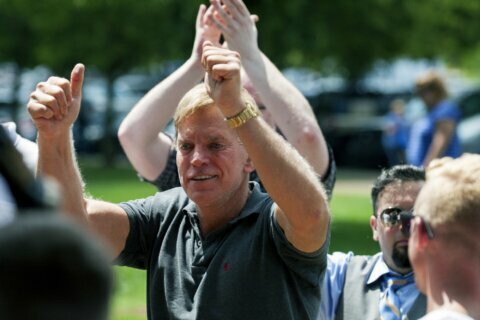