Virginia Gov. Northam: ‘I am not going anywhere’

Virginia Gov. Ralph Northam has no plans to resign, saying, "I am not going anywhere," after controversial yearbook photos surfaced from his days in medical school.

WASHINGTON — Virginia Gov. Ralph Northam has no plans to resign, saying, “I am not going anywhere,” after controversial yearbook photos surfaced from his days in medical school.

In an interview with Gayle King for CBS This Morning, Northam said that he considered resigning but decided that Virginia needs him to stay as governor.

“I have thought about resigning but I’ve also thought about what Virginia needs right now and I really think that I’m in a position where I can take Virginia to the next level and it will be very positive,” Northam said. “We have a number of inequities in this country right now and in Virginia, and we’re in a position to really stop talking so much and now to take action with policy to address these inequities.”

Images of a 1984 yearbook page showing a picture of a person in blackface and another wearing a Ku Klux Klan hood next to different pictures of the governor have prompted numerous calls for the governor to step down.

A Democratic Virginia congressman says Northam has lost too much credibility to remain in office.

Rep. Don Beyer called Northam’s initial admission, and then denials, that he was in the racist photo “very bizarre.” Northam later acknowledged he wore blackface at a separate event in the 1980s.

Beyer tells CBS’ “Face the Nation” that Northam has sacrificed too much of his ability to govern.

Beyer also says he believes the two women who have accused Democratic Lt. Gov. Justin Fairfax of sexual assault. Beyer says if you believe the women, there is “no choice” but to call for Fairfax’s resignation.

The congressman says Democratic Attorney General Mark Herring, who also admitted to wearing blackface, has been “very responsible” in owning up to his mistake.

Gov. Northam, said that his background as a physician will help him in healing his state.

“I’ve been in some very difficult situations, life and death situations taking care of sick children and right now Virginia needs someone that can heal. There’s no better person to do that than a doctor. Virginia also needs someone who is strong, who has empathy, who has courage, and who has a moral compass and that is why I am not going anywhere. I have learned from this, I have a lot more to learn.”

After bits of the interview aired on CBS, Gov. Northam’s usage of the term “indentured servants” was criticized by many on social media. King corrected Northam with the term “slaves.”

“If you look at Virginia’s history we’re now at the 400-year anniversary just 90 miles from here in 1619 the first indentured servants from Africa landed on our shores at Old Point Comfort what we call now Fort Monroe,” said Northam, to which King interjected, “also known as slavery.” Virginians split over whether Northam should resign, poll shows 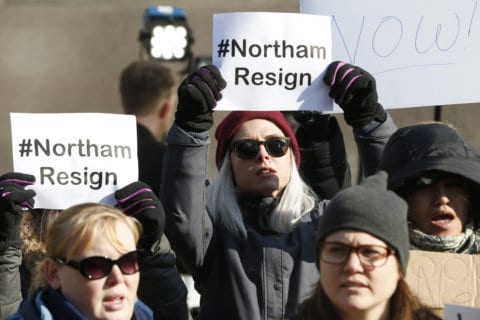