WASHINGTON — Several weeks after racist photos on his medical school yearbook photo came to light, approval ratings for Virginia Gov. Ralph Northam have tanked to an all-time low — but Virginians are not necessarily clamoring for the embattled governor to resign.

That’s according to a new poll from the University of Virginia Center for Politics/Ipsos poll published Wednesday.

Overall, just 17 percent of Virginians approve of the job Northam is doing, and more than a third — 34 percent — disapprove, according to the poll. Even more Virginians seem to be taking a wait-and-see approach, with 44 percent of respondents saying they neither approve nor disapprove of Northam’s handling of the job.

However, the rock-bottom approval ratings did not translate to calls for the governor to resign.

“You can see that this scandal around the governor has taken a toll on his approval, although we found … that at best there’s mixed support for his resignation,” said Kyle Kondik, managing editor of Larry Sabato’s Crystal Ball at the University of Virginia Center for Politics, in an interview with WTOP.

The poll results show Northam “trying to hang tough in office right now,” Kondik said. “And I don’t think you can say that there’s some sort of widespread public clamoring for him to resign.”

Virginians are even less keen on the General Assembly removing Northam. Just 21 percent of respondents said they believed that Northam should be impeached.

Thursday’s Ipsos poll seems to indicate more Virginians are willing to give Northam a second chance. In a Washington Post/Schar poll earlier this month, respondents were evenly split — 47 percent to 47 percent — on the question of whether Northam should resign.

“Maybe as we get a little bit of a distance from the emergence of this photo on Ralph Northam’s yearbook page and his fairly disastrous press conference, maybe people are becoming more accustomed to the idea of him staying in office,” Kondik said.

The poll found slightly stronger support among Virginians for the idea that Virginia Lt. Gov. Justin Fairfax should resign. The No. 2 official, who would become governor if Northam were to step down, has also been embroiled in controversy after two women accused him of sexual assaulting them several years ago. Fairfax has denied the allegations of assault and said the encounters with both women were consensual.

Another 34 percent of respondents said they weren’t sure whether Fairfax should resign.

“I think Fairfax is probably in the worst shape of the three statewide Democrats,” Kondik said.

However, there were stark racial differences on the question of whether Fairfax should resign, pollsters noted.

While 39 percent of white Virginians said they thought Fairfax should resign in the wake of the allegations, just 8 percent of black Virginians held the same view.

Virginia Attorney General Mark Herring has also admitted wearing blackface at a party in the 1980s to look like a rapper, he said. Less than one in five Virginia voters said they think Herring should resign or be impeached. Virginia Gov. Northam: ‘I am not going anywhere’ 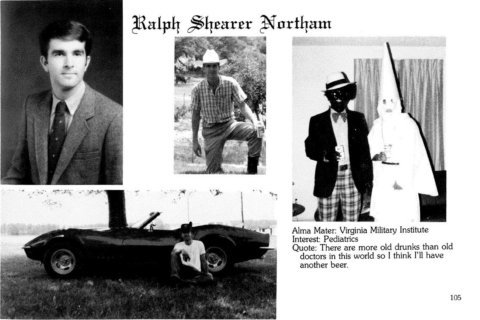