WASHINGTON — Jurors in the trial of the man charged with ramming his car into a crowd of counter-protesters during the August 2017 white nationalist rally in Charlottesville have heard from the man behind the wheel — and James Alex Fields has told two very different stories.

As the prosecution wrapped up its case Tuesday, jurors heard from detective Steve Young, whose body-camera video of Fields being searched provided jurors their first chance to hear Fields’ voice.

Wednesday, a Virginia State Police crash reconstructionist told jurors he was unable to pinpoint how fast Fields car was going when he crashed into the crowd, according to several news organizations in the courtroom.

Clifford Thomas testified Fields Dodge Challenger was traveling 28 miles per hour before the crash into the crowd, and approximately 23 miles per hour when he hit a stopped Toyota Camry in front of the group.

Thomas said the Camry lurched forward at 17 miles per hour.

Hayden Calhoun and his girlfriend Sara Bolstad had traveled from the Richmond area to Charlottesville.

After the rally was dispersed by police, the couple met Fields, who suggested they walk together for safety’s sake.

Fields gave the couple a ride back to their car, and suggested they get a bite to eat, but they declined.

They described Fields’ demeanor as calm but tired.

Several days after the crash, when he learned Fields was the suspect in the crash, Calhoun called the FBI.

On Tuesday, jurors heard Fields’ description of the crash.

“I’m sorry that — I don’t know. I didn’t want to hurt people, but I thought they were attacking me,” Fields told Young, minutes after his severely damaged car had been stopped a few miles from the crash scene where 32-year-old Heather Heyer was killed, and dozens others were injured.

Later in a police headquarters interview room, Fields was read his Miranda rights and he declined to speak. When told several people were severely injured and one had died, Young testified Fields hyperventilated for several minutes.

At the Charlottesville jail, when questioned by a magistrate, Fields said he was trying to leave the scene, and saw a crowd gathered around the cars in front of him.

He didn’t describe the crash to the magistrate.

In one call, Fields lamented his arrest: “I went all my life doing nothing wrong and then I get mobbed by a violent group of terrorists.”

Jurors heard another call in which he referred to Heyer’s mother, Susan Bro, as “anti-white” and “a communist.” After his mother told him to stop talking, Fields said, “She is the enemy.”

In another call, several months after the crash, Fields described “getting mobbed by a violent group of terrorist,” and described “antifa” — or anti-fascists — waving an ISIS flag.

Fields’ mother said she didn’t believe that to be true.

Also, jurors saw a text message Fields sent to his mother — which included a photo of Adolf Hitler — to demonstrate he expected a violent confrontation at that white nationalist rally in Charlottesville.

On Aug. 11, as Fields departed for the rally, his mother texted, “Be careful.” Fields replied: “We’re not the one [sic] who need to be careful” — together with a photo of Hitler.

The defense argued that showing the text exchange to jurors would be unfair and prejudicial.

“The inclusion of Hitler implies both aggression and violent intent toward opponents Fields expected to encounter the next day,” Charlottesville prosecutor Joseph Platania wrote in a motion. “Fields’ own statements, close in time to the conduct he is charged with, are the most probative evidence possible as to his state of mind and intent.”

After the prosecution rested, with the jury out of the room, the defense asked the judge to dismiss the first-degree murder charge and eight counts of malicious wounding, saying prosecutors had failed to show the necessary intent.

“I’m not sure what else his intent could have been,” Charlottesville Circuit Court Judge Richard Moore said. “His explanation that he felt threatened is contrary to the evidence of the case.”

The first witness for the defense was Officer Tammy Shifflett, who directed traffic in the area Aug. 12. She recounted how a violent, angry crowd was fighting, and that she had to fall back when she felt the effects of tear gas.

Deputy Paul Critzer of the Charlottesville sheriff’s office testified he followed Fields from downtown Charlottesville, to the intersection of Monticello and Blenheim Avenues, where Fields stopped.

Critzer noted Fields drove past four signs for Interstate 64 along the way. In opening statements, the defense told jurors Fields did not attempt to flee.

The judge expected the defense to call seven or eight more witnesses to the stand, and jury could begin deliberations by Friday.

If convicted, Fields faces the possibility of life in prison. 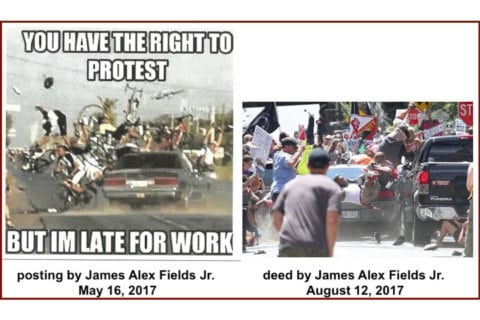 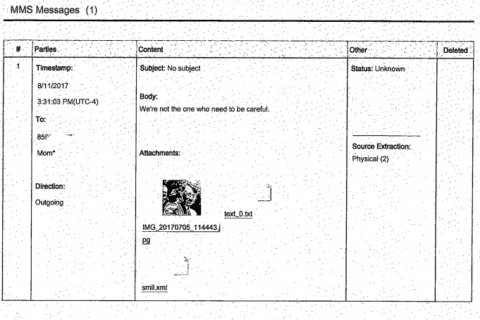