A Virginia teen's run-in with giant hogweed left burns. Experts are reminding people of the dangers of giant hogweed and giving guidance on what to do if the invasive plant is found.
Listen now to WTOP News WTOP.com | Alexa | Google Home | WTOP App | 103.5 FM

WASHINGTON — A Virginia teen is recovering after he was believed to be burned by the sap of a giant hogweed plant earlier this week.

The run-in with the dangerous plant in the commonwealth has plant experts reminding people of the dangers of giant hogweed and giving guidance on what to do if one is found.

Jordan Metzgar, curator of the Massey Herbarium at Virginia Tech, said if this is confirmed to be the plant, this case would be the fifth reported giant hogweed found in Virginia.

The Richmond Times-Dispatch reports the teenager was pulling the plant during a landscaping job when he touched his face, and then the sap began to burn him.

Metzgar said this case appears to be like the others that involve a giant hogweed, which may have been planted years ago before they were labeled an invasive species and outlawed.

“We still haven’t seen any evidence of it growing in the wild or spreading out of cultivation in Virginia,” Metzgar said.

It’s important for the public to educate itself on what the plants look like and, if they find it, to report it to state officials, Metzgar added.

If the decision is made to remove it, Metzgar said it’s important to use care. That starts with a person’s attire. “Covering up is a good idea to keep the sap off you,” Metzgar said.

Carefully remove and contain any seeds on the plant, then carefully cut it down and remove the plant and its root stocks. Once out of the ground, lay the plant pieces out to die, in the sun.

Never use a weed wacker on a giant hogweed because Metzgar said that will lead to sap going everywhere.

Also, consider removing the plant at night since, according to Metzgar, the chemicals in the sap that burn you are activated by sunlight.

Finally, check back in the area over the next couple of years to make sure the plant doesn’t try to make a comeback. 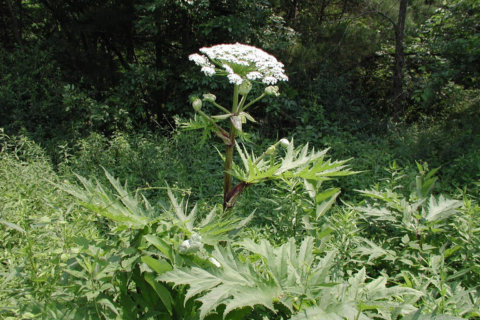 Giant hogweed, a toxic plant you need to know about in Va.