WASHINGTON — The best way to prevent sports-related concussions is not to hit your head, but research released Tuesday shows which protective headgear works best to reduce the risk of head injuries for soccer players when collisions do happen.

“There’s a wide range of performance within the current [headgear] available to consumers,” Virginia Tech Helmet Lab Director Steve Rowson said. “When you do have a head impact, you want to have the very best head protection available.”

The headgear is meant to prevent the most common type of concussion in soccer — one that occurs when two players knock heads when both are trying to head the ball.

“What we found is that the forces associated with an impact like that could be as high as 150 g’s, which is a very hard hit,” Rowson said.

Laboratory testing determined that better models reduce impact forces by more than 50 percent, and concussion risk by more than 70 percent, Rowson said. Some of the poorest-performing headgear, he added, is equivalent to having no protection at all.

Sensors embedded in test dummy heads measured linear and rotational acceleration for the calculation of a STAR rating.

The highest-scoring soccer headgear cap, the Gamebreaker Multi-Sport Headgear, earned four out of five stars and costs about $75. The headband offering the best protection, Storelli’s ExoShield, reduced the risk of injury 84 percent for the impacts tested, according to researchers. It costs about $60. 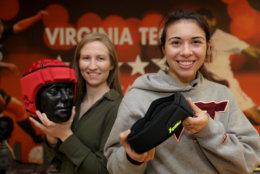 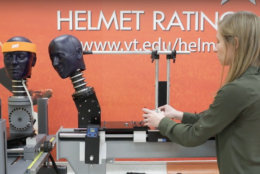 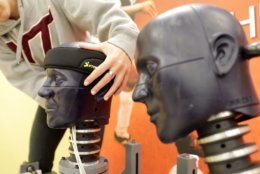 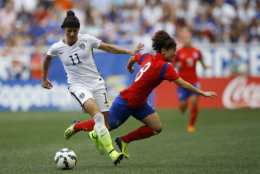 It’s currently not considered “normal” to wear protective headgear in soccer. No leagues require them. They’re optional equipment. Some players who’ve had a history of injury wear them. Some parents worried about kids having concussion have their children wear them.

“Now that there are data, you may see more and more people begin to wear them, because some of them certainly are effective at reducing risk,” Rowson said.

Helmet Lab evaluations currently include football and hockey gear. Within the next month, rankings will be released for bike helmets. This summer, rankings will include baseball and softball headwear. Youth-specific protective headgear rankings are expected this fall.

“A player wearing one only reduces the likelihood of a concussion occurring,” Rowson stressed. “A concussion can still occur; this just reduces the risk.”

The lab’s work is part of Virginia Tech’s service mission and is independent of any funding from manufacturers.

“That means a lot,” Rowson said. “We’re not an industry-funded entity. A lot of it is self-funding to provide objective and independent information to consumers.”