Officials in Virginia knew there were problems with voters assigned to the wrong House districts in the Fredericksburg area since at least early 2015, documents and interviews show.
Listen now to WTOP News WTOP.com | Alexa | Google Home | WTOP App | 103.5 FM

WASHINGTON — Leaders of Virginia’s Department of Elections, House Speaker Bill Howell and Fredericksburg’s Electoral Board knew there were problems with voters assigned to the wrong House districts in the Fredericksburg area since at least early 2015, documents and interviews show.

That is more than two years before the Nov. 7 election to replace Howell that is now mired in a federal lawsuit that could help decide which party controls the Virginia House of Delegates.

“There were some issues raised in 2015 that we believed to have been resolved, and apparently, there were additional issues that were … still impacting voters,” Virginia Department of Elections Commissioner Edgardo Cortes said in an interview.

The initial problems emerged when Howell faced a 2015 GOP primary challenge from Susan Stimpson but had not been reported until now. Howell’s campaign alerted Fredericksburg elections officials and the state’s Department of Elections to issues on a number of street segments in the city during that primary campaign. The campaign was apparently satisfied that the particular problems they had identified with voters wrongly assigned outside the 28th District had been fixed just weeks before the primary.

No issues were raised then about the misassigned voters in the Stafford County portion of the district, and there wasn’t a larger investigation launched into other voters who may have been casting ballots in the wrong races.

As those corrections were happening, voter registration system logs from the Department of Elections show that at least some voters on Charles Street were only briefly correctly put in the 28th District in March 2015, before being wrongly flipped back to the 88th District by April 2015, where they remained through the 2017 election.

“If a special election were to occur, we would have a problem,” then-Fredericksburg Registrar Juanita Pitchford wrote to the state Board of Elections in March 2016. “If you look at the Legislative District Maps on the [General Assembly] website, those maps clearly show the splits, but that is in contradiction to the LANGUAGE of the Code!”

A Virginia Department of Elections policy analyst replied in May 2016 that the confusion about the lines and precincts was simply because the legislative language is based on previous precinct lines that had since been updated.

“Sorry this took so long, but you’ll be relieved to hear that everything is A-OK!,” Brooks Braun wrote Pitchford in an email filed as part of an ongoing lawsuit tied to this year’s 28th District race.

It appears, however, that despite similar reassurances about the lines from the Fredericksburg city attorney to the Electoral Board on Nov. 7, the underlying problems of voters not properly assigned even based on those correct maps were never addressed.

In this year’s election, at least 147 voters cast ballots in the wrong races in parts of Stafford County and Fredericksburg. Republican Bob Thomas defeated Democrat Joshua Cole in the 28th District race by 73 votes, and voters backed by the House Democratic Caucus are asking a federal judge to order an election do-over.

Without a redo, Republicans expect to either control the House 51-49 or split control 50-50 with Democrats, depending on the outcome of a random drawing Thursday and a potential additional recount in a tied race in Newport News.

Data from the Department of Elections data show that while a few of the issues on Nov. 7 were created by updates over the last three years, others had been in place since redistricting changes in 2011 or 2012 and have not been touched in the time period since.

“These appear to be other issues,” Cortes said, that were not investigated in 2015, even though he described the 2015 problems as the same types of issues with certain street segments wrongly assigned to one district or the other.

The registrar’s office gave significant attention to streets such as Ocala Way in Stafford County and Charles Street in Fredericksburg with a number of updates in April 2015 and April 2016, even if it ended up leaving voters in the wrong districts. But there are no signs, based on changes tracked in the state voter registration database, that any of the other street segments wrongly assigned to the 28th, 88th or 2nd House districts were similarly identified — even at that time.

The state Department of Elections does not audit the voter registration system’s district assignments.

“There will certainly be discussion about what role the state Department of Elections plays in confirming that they’ve done all the assignments correctly and what to do if we find that people haven’t been correctly assigned, but, currently, that process happens at the local level,” Cortes said.

In the 2017 election, in which Republican Bob Thomas beat Democrat Joshua Cole by 73 votes, a Nov. 27 report from the Department of Elections found at least 260 voters in Stafford County and Fredericksburg, who should be listed in the 28th District, listed in either the 2nd or 88th districts. Eighty-six of those voters cast ballots.

Some blocks were actually flipped back and forth between the 28th, 88th or 2nd House districts several times. Other homes were wrongly added to a district when families moved into new construction or simply appeared to have been put in the wrong districts as part of redistricting changes in 2011 or 2012.

“There were some issues back in 2015 that we were made aware of and that the registrar worked with the local electeds [officials] there and with the city to remedy, and we believed had been resolved,” Cortes said.

No additional significant changes had been implemented with the system until voter complaints at the polls on Nov. 7, Cortes said.

In 2015, when former Stafford County Board Chair Susan Stimpson challenged Howell in a Republican primary in the 28th District, documents filed in connection with the current federal lawsuit show that an initial complaint about a voter getting an incorrect ballot between the 28th and 88th districts was made by March 2015.

“This must be cleared up before the June primary in District 28,” read the March 2015 Fredericksburg Electoral Board minutes filed as part of the ongoing lawsuit.

State data showed many of the problems were apparently not addressed, in part due to consistent misunderstandings about where the meandering district lines were drawn. While state law describes the districts as largely following precinct boundaries, those precinct boundaries in the state code are based on earlier lines before the 2011 redistricting, not the current precinct lines.

Ahead of the 2016 General Assembly session, the Fredericksburg Electoral Board met with Howell to ask for technical adjustments to the district boundaries to reduce the number of precincts split between the 28th and 88th House districts, board meeting minutes said.

The bill was eventually carried by Del. Mark Cole, representing the 88th District, but was vetoed by Gov. Terry McAuliffe over concerns that the changes to all of the districts included in the efforts were intended to get more favorable lines for legislators than to fix any actual problems.

“Our next step will be to go to the state Board [of Elections] to find out what to do,” the March 2016 electoral board minutes said. “The maps for the City of Fredericksburg do not match the code.”

Apparently, despite issues raised by at least one member of the electoral board, the main concerns at the time were not focused on the actual misassignment of voters, but rather whether the lines Fredericksburg was using to understand which voters should be assigned to which district were correct.

“Now we are back to square one, having to figure out what to do,” Pitchford wrote the state in March 2016.

This issue did not make it onto the political radar despite the attention on the primary in 2015, University of Mary Washington professor Stephen Farnsworth said.

The city electoral board set an official policy at the time that no one in the department should discuss the issues publicly. “What is our media policy? At this time, no one will talk to the media, and if they call, the [General Registrar] is to say, ‘No comment,’” board meeting minutes read.

While a Freedom of Information Act request was submitted shortly after that, it is not clear who submitted the request or what information, if any, was ever actually released.

Stimpson actually called the registrar’s office in early 2016 and asked for more details about the lines and was told that the city was working to resolve the issues, electoral board meeting minutes show.

Those meeting minutes have never been publicly available online, since the city electoral board only began posting them publicly in late 2016.

During the Nov. 7 election, Fredericksburg voter D.D. Lecky said the two electoral board members she complained to about getting the wrong ballot had a map taken down that showed Lecky was right about being misassigned.

Lecky is among the plaintiffs asking a federal judge in Alexandria, Virginia, on Friday to keep Thomas from being seated in the House of Delegates next week and to order a new election.

“If this court does not act, the House of Delegates will be organized with the participation of Mr. Thomas, even if he is later unseated. These votes will have an inordinate effect on which bills are subsequently considered and voted on by the full House of Delegates — and the harm would be irreparable if those decisions were shaped by a delegate whose election was constitutionally infirm,” the plaintiffs argued in a final motion before a hearing scheduled for Friday afternoon.

Thomas has asked the judge to delay the lawsuit or at least allow him to be seated as the case moves forward. 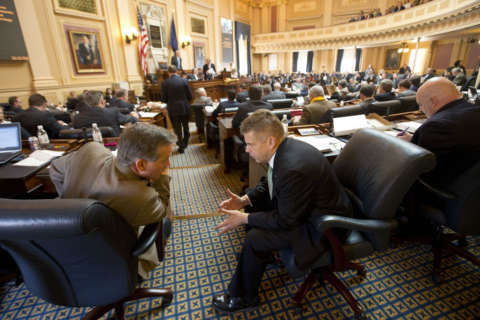