Led by Richard Spencer, founder of a white nationalist, alt-right think tank that was listed as a hate group by the Southern Poverty Law Center, between 40 to 50 people gathered in Emancipation Park wearing white polo shirts and khakis and carrying Tiki torches.

The rally began around 7:40 p.m. and ended five to 10 minutes later, Charlottesville police said in a statement.

White nationalists now chanting — “We will be back”. About 3 dozen supporters in Emancipation Park. Plenty of police on standby in park. pic.twitter.com/LuJEsAgxQy

Spencer told The Washington Post that the march was a “planned flash mob” that the group had been planning for a long time.

Charlottesville Mayor Mike Signer tweeted that the gathering was a “despicable visit by neo-Nazi cowards” and said that he is looking at legal options.

Democratic candidate for governor Ralph Northam said in a statement that the city has been asked twice in recent months to defend the values of “openness, diversity, and inclusion against an ideology of hatred and bigotry.”

White nationalists started marching in Charlottesville beginning in May when the city voted to remove the statue of Robert E. Lee from Lee Park. Lee Park was renamed Emancipation Park in June.

White nationalist gathered at the University of Virginia campus in August, the night before the Aug. 12 “Unite the Right” rally. 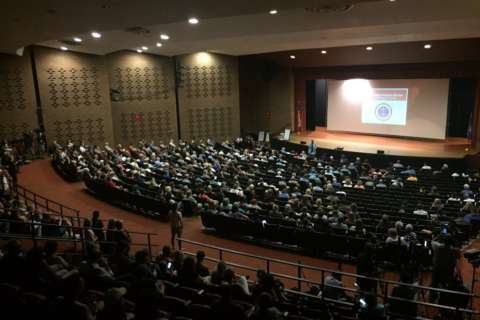