WASHINGTON — Hundreds of white nationalists, carrying Tiki torches, gathered at the University of Virginia’s campus Friday in Charlottesville and surrounded a group of counter-protesters.

The torch-lit march came after a federal judge ruled in favor of Unite the Right Rally organizer Jason Kessler, who filed a suit against the city after it denied his request to hold the rally at Emancipation Park, formerly named Lee Park after Confederate Gen. Robert E. Lee. Police estimate as many as 2,000 to 6,000 people will attend the rally on Saturday.

The Daily Progress in Charlottesville reported that the white nationalists began marching at the college’s Nameless Field and ended at the rotunda, where police declared the gathering an unlawful assembly. Tweets show counter-protesters surrounded by Tiki-torch-carrying white nationalists.

The two groups clashed before police broke it up, NBC29 in Charlottesville reported.

The university’s president Teresa A. Sullivan said in a statement that she strongly condemned the unprovoked assault on the UVA community. “The violence displayed on Grounds is intolerable and is entirely inconsistent with the University’s values.”

In a statement, Charlottesville Mayor Mike Signer called the white nationalists’ march on campus a “cowardly parade of hatred, bigotry, racism, and intolerance … down the lawns of the architect of our Bill of Rights.” 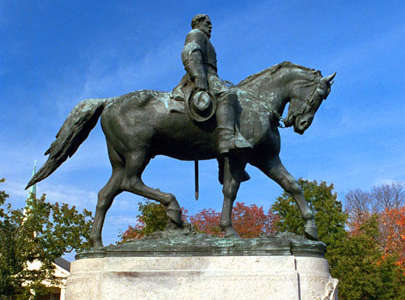