WASHINGTON — Deriding what he calls anti-American actions by NFL owners and players, Corey Stewart, a Republican candidate for the U.S. Senate from Virginia, is calling on Congress to revoke the league’s federal antitrust exemptions.

Stewart is incensed by displays of protest during the national anthem that include taking a knee.

“Players are showing disrespect for our country, disrespect for police officers, disrespect for the men and women who have fought and died for this country,” Stewart said at a news conference Wednesday outside the downtown D.C. offices of the NFL Players Association.

“They should compete on an equal playing field just like any other business in America,” Stewart said. “Perhaps they will suffer a little bit themselves, and frankly, I hope those teams go bankrupt.”

Stewart began his news conference by reciting the names of 11 Marines killed over the past week in Afghanistan.

“These are real American heroes,” Stewart said. “They are why we stand for the national anthem. They are why we respect the flag of the United States of America.”

Watching Stewart’s announcement from the sidewalk nearby, 20-year Navy veteran Saleem Abdul-Mateen, of D.C., questioned Stewart’s authority to be offended on behalf of veterans.

“I don’t think he’s a veteran, which means he can’t speak for veterans,” Abdul-Mateen said.

Stewart is not a veteran. Asked him about Abdul-Mateen’s comment, Stewart replied: “Well, he’s wrong. I’m an American citizen.”

Stewart said he has not talked to congressional leaders about his idea: “I plan to — especially next year, after I’m elected.”

The Republican primary for Senate in Virginia is June 12, 2018. 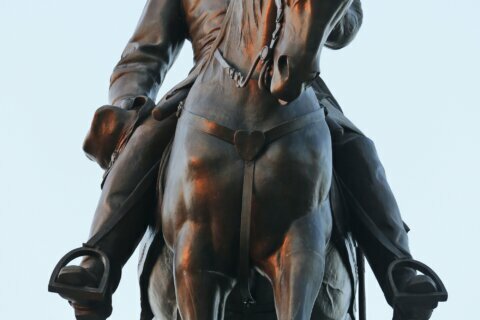