Virginia Women for Trump founder: ‘I know he will not give in’

President Trump may be facing heat from both Democrats and Republicans but he's still very popular with his core base, like Alice Butler-Short, the founder of Virginia Women for Trump.
Listen now to WTOP News WTOP.com | Alexa | Google Home | WTOP App | 103.5 FM
(1/2) 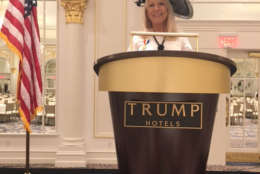 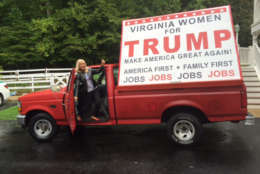 WASHINGTON — “If the president called me and said, ‘I want to have a rally for women in two days,’ I could fill an arena for him,” said Alice Butler-Short.

She’s the founder and director of the group Virginia Women For Trump, and she’s standing by the president as he faces continuing criticism from Democrats and Republicans alike.

“I know he will not give in under all of this pressure,” said Butler-Short, a Fairfax County resident. “He is a very, very strong man and his motives are pure. His intentions are pure. He will do the best that he possibly can to keep every promise that he made during his campaign.”

The most recent controversy for Trump involved his comments after the deadly violence in Charlottesville, in which he said more than once that both white nationalists and counterprotesters were to blame.

“I feel that no matter what he said or how he said it, [opponents] would find something wrong with it,” she said.

“They can never give credit to this man for anything.”

Butler-Short agreed with the president that Confederate monuments should not come down and she called plans to remove a statue of Robert E. Lee in Charlottesville “unlawful” under the Code of Virginia.

Taking them down won’t accomplish anything, she added.

She’s also concerned about how far the trend will go.

“Do we change the name of Washington, D.C.? Do we pull down the Jefferson Memorial? This is ridiculous. These are the tactics of communists. That’s the only way you can explain it.”

As for Trump’s frequent, off-the-cuff, unplanned remarks, they show that he’s “a real person,” Butler-Short said.

“We don’t mind … now and then if there’s a little human frailty or whatever you would like to call it. We don’t mind,” she said.

“We just know that this man is the right man for these times. This man loves our country. He loves the people. He is doing the very best job that he can, and we will stand with him.”

Butler-Short’s support for Trump, she said, goes back to February 2015, when she saw him at the Conservative Political Action Conference.

“I’ve been involved in politics for years, but never ever before was I so passionate about a candidate,” she said, adding that he doesn’t need the job.

“This man and his family have given up so much, and it really affects me that the media doesn’t put that forward. He is making an enormous sacrifice at this stage in his life, when as a billionaire he could be just living the high life.”

“My purpose was to debunk the myth that women did not like Trump, because I knew that to be false. We actually became a movement of our own, and we’re still working,” she said.

Trump, with his tweets and continued campaign rallies, is unlike any other president — and supporters like Butler-Short love him for it.

“He is unusual in every way and throws people off, I think, but it’s a wonderful thing,” she said.