WASHINGTON — While James Alex Fields Jr. is held without bond, charged with murder in the fatal car attack at Saturday’s white nationalist rally in Charlottesville, Virginia, local and federal prosecutors say additional charges could be coming.

However, the FBI is heading the Department of Justice civil-rights investigation, opened Saturday evening by U.S. Attorney General Jeff Sessions, to determine whether there is evidence against Fields or others to support federal hate or domestic terrorism charges.

Sessions said Monday the car crash that killed 32-year-old counter-protester Heather Heyer meets the standard for domestic terrorism, but the declaration would have more symbolic than legal significance, since there is no specific federal crime for domestic terror.

John Fishwick Jr., U.S. Attorney for the Western District of Virginia in the Obama administration, told WTOP federal prosecutors will work with Charlottesville prosecutors “to determine what’s best for the case.”

“It’s been opened as a civil rights investigation, but the FBI has broad latitude here,” said Fishwick, standing on the Charlottesville downtown mall, two blocks from where Fields allegedly drove his Dodge Challenger into a group of counter-protesters, killing Heyer and injuring 19 other people.

“They’ll be interviewing people, and running down social media and cellphone records to find out exactly what happened, and not only what this defendant did, but who may have helped him and what was done to help him,” said Fishwick, who stepped down in January, after the election of Republican President Donald Trump.

“It starts as a civil rights investigation, but if other crimes are uncovered — domestic terrorism, other matters like that — they’ll bring them to the prosecutors’ attention and pursue those.”

If evidence supports federal charges against Fields or others, local and federal prosecutors would, in theory, work together to determine in which venue and order trials should be held.

Fields could be initially tried for murder and the four other current charges in Charlottesville Circuit Court, and subsequently charged with federal crimes.

“As long as it doesn’t violate double jeopardy,” said Fishwick. “Many of the federal charges are different than the state charges.”

In charging documents, Charlottesville prosecutors have not detailed any of the evidence against Fields, or suggested a motive for the killing.

Warner “Dave” Chapman, commonwealth attorney for the city of Charlottesville, didn’t immediately respond to questions from WTOP about how his office might precede in the prosecution of Fields.

In a general statement, released Monday morning after Fields was ordered held without bond in District Court, Chapman said it was premature to discuss prosecution strategy.

“Final decisions regarding the charges against Mr. Fields will not be made until the investigation is complete. Before then, we will not engage in public discussion or speculation about new or additional charges,” Chapman wrote.

Hate, domestic terror, both, or neither

Former FBI special agent Clint Van Zandt told WTOP the Bureau has investigated hate crimes since World War I, “but it was the Hate Crimes Prevention Act of 2009 that expanded the investigative jurisdiction of such crimes, in order to determine if a crime such as murder, arson or vandalism was committed based upon certain biases of the person charged in a crime, such as race, religion, ethnicity, [or] gender.”

“Hate in itself is not a crime,” Van Zandt said, “but it can obviously be one of the motivating factors for such crimes.”

Even if a murder suspect is an avowed racist, that alone doesn’t mean the act was a hate crime.

While hate crimes focus on the targeted group, domestic terrorism is often defined as the unlawful use of force and violence to intimidate in furtherance of a social objective.

“One of the many questions to answer on both the local and the federal level is motivation of the driver, [for instance] was there a political or ideological motive for him ramming his car through a crowd of people spilling into the street?” Van Zandt said.

Van Zandt acknowledges many are demanding swift action from the Trump administration and the FBI, but he said speed isn’t the top priority.

“No law enforcement agency wants to rush to judgment before all the facts are in on the case,” Van Zandt said.

“Meanwhile, the mood of America has again been manipulated by a small number of extreme radical individuals, many with a heart full of unresolved hate, that played out this time on the shaded streets of Charlottesville, Virginia.” 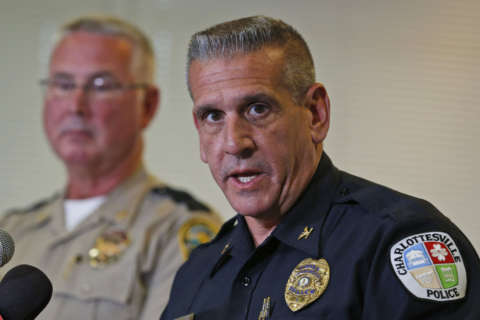