Ugly fish invaders have been living in the Potomac River for more than a decade. But a study indicates the population of northern snakehead has stabilized, and has probably started to drop in at least some areas of the river.
Listen now to WTOP News WTOP.com | Alexa | Google Home | WTOP App | 103.5 FM

WASHINGTON — Ugly fish invaders have been living in the Potomac River for more than a decade.

But a study indicates the population of northern snakehead has stabilized, and has probably started to drop in at least some areas of the river.

John Odenkirk, a biologist with the Virginia Department of Game and Inland Fisheries, co-authored a paper about it that was published last week in the journal Transactions of the American Fisheries Society.

The study looked at snakehead population changes over as long as 12 years in four Virginia tidal creeks: Aquia, Dogue, Little Hunting and Pohick.

During that time, the department has been using electrofishing to capture snakeheads and estimate their populations in those creeks.

In every creek except Aquia, the study found population growth followed by stabilization.

In Little Hunting Creek, population estimates dropped every year from 2013 to 2015.

“What we think is happening is intense exploitation, because everybody now likes to eat them, they like to catch them. The bow fishery has taken off. People are hunting them at night with bows and arrows and lights,” Odenkirk told WTOP.

He said the snakeheads appear to be doing what many invasive species do in a new environment; their populations go up, and eventually level off.

“Hopefully we don’t have a whole lot to worry about,” he said.

If you catch a snakehead and want to keep it, Virginia law says you have to kill it.

But people continue to keep live snakeheads and move them to new waterways in the area.

That’s why Odenkirk says his department will push to get the penalty for intentionally moving the fish bumped up from a Class 3 misdemeanor involving only fines, to a more severe Class 2 misdemeanor.

“People might think twice about moving fish around if they know if they get caught they’re going to have to hire an attorney, and they’re looking at potential jail time,” he said. 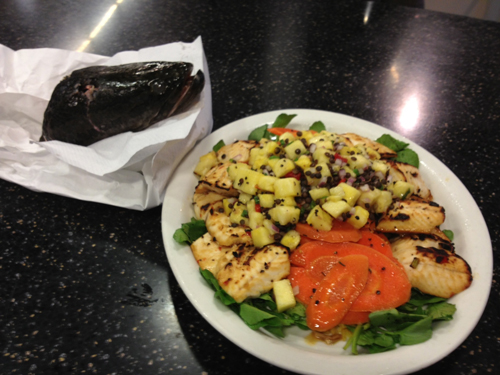 Snakehead a delicacy on restaurant menus