How to keep the vacation going when the unexpected hits

If a major cancellation happens, is it possible to book a whole new summer vacation this late in the season without breaking the bank?
Listen now to WTOP News WTOP.com | Alexa | Google Home | WTOP App | 103.5 FM

WASHINGTON — Thousands of tourists hoping for a beach getaway have been forced to leave North Carolina’s Outer Banks because a construction crew accidentally sliced through a major power line.

So, if a cancellation like that happens, is it possible to book a whole new summer vacation this late in the season without breaking the bank?

“If you try to change your travel plans at the last minute during high season to another high season destination, you either don’t get in, or you get in and pay double — and that’s not a vacation at all,” CBS Travel Editor Peter Greenberg told WTOP.

He says if your travel plans get busted, resist the temptation to reach for your bucket list of places you’ve always wanted to visit.

“Pick a place you never wanted to go, where they probably have available airline seats and hotel rooms, and go. You will be very pleasantly surprised at all the things you can discover there and how happy people are to see you. I’ve always used that as a rule.”

Another idea is to choose a place you’re familiar with, but go in the offseason, such as Orlando in November.

When searching for airfares, hone in on alternative airports.

You can also save money by skipping hotels and heading for homes.

“This is where Airbnb really can play into it because there are so many listings that aren’t taken up every time that may suddenly be available within a 50-mile radius of where you happen to be,” Greenberg said. 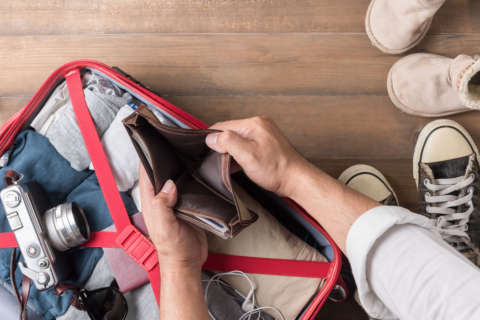 1 in 5 Americans goes into debt to pay for vacations