The National Park Service is working to evaluate the situation and repair the sinkhole as soon as possible. The southbound lanes are not impacted by the closure.
Listen now to WTOP News WTOP.com | Alexa | Google Home | WTOP App | 103.5 FM
(1/5) 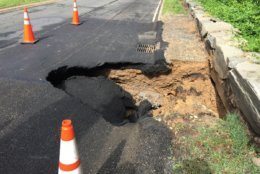 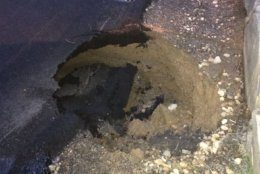 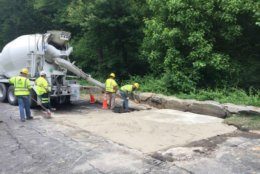 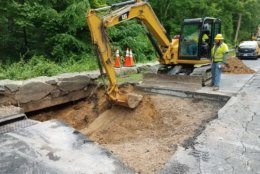 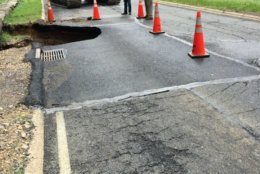 Both northbound lanes of the George Washington Parkway will remain closed for the next several days from Virginia 123, Chain Bridge Road, to I-495 and the Capital Beltway because of a sinkhole that developed Friday night, the National Park Service said Saturday.

After stabilization work is done, one northbound lane will reopen and one lane will remain closed until a long-term fix can be made.

The National Park Service said it hopes to have one northbound lane open for the Monday morning rush hour. The rain expected throughout the weekend, however, may slow the work and delay that opening.

Engineers and experts from the Federal Highway Administration will work on a long-term fix over the coming weeks, but said it may be much more complex and take some time.

“Construction on a more permanent solution will likely require both lanes to be closed,” NPS said in a Saturday news release. “Engineers are actively monitoring the situation and additional closures may be necessary for safety as conditions evolve.”

The northbound lanes of the George Washington Parkway, between Virginia state Route 123 and the entrance to the Capital Beltway, near exit 43, have been closed since about 6:45 p.m. on Friday,

The closure affects about five miles of roadway. The closure does not affect the parkway’s southbound lanes.

Northbound George Washington Parkway closed VA 123 to I-495 due to a sinkhole near Dead Run. @USDOTFHWA Engineers will conduct full assessment in the daylight Saturday. Unknown when the northbound lanes will reopen. Check https://t.co/TrUCMJ5foa for updates. #VaTraffic pic.twitter.com/cMW4oWP7bi

The NPS said in its statement that no accidents have been reported and “closing the George Washington Parkway is never a decision that is made lightly.

A sinkhole developed in the same area, near Dead Run, in March. That sinkhole opened up underneath the road following heavy rain.

The March sinkhole was about 10 feet deep, 12 feet wide and 30 feet long — or roughly the size of a city bus, according to preliminary findings by the NPS.

Here’s the area where road crews are investigating the possible sinkhole. 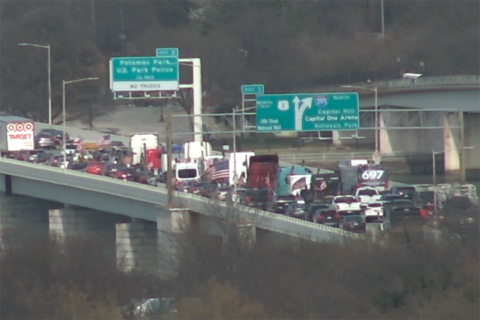 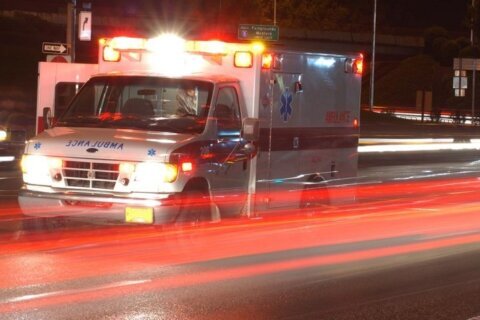