Metro still doesn’t know what caused Red Line rail cars to detach near Union Station earlier this month, but insists there’s been no tampering of evidence in the investigation, the transit system said.

After cars on a Red Line train “decoupled” Oct. 9 while traveling to the NoMa-Gallaudet U station, leaving some passengers stranded for hours, investigators discovered that someone may have manipulated evidence. The Metro Safety Commission suggested that a supervisor may have instructed employees to tighten a bolt on the mechanism that failed and was under investigation.

In a similar decoupling incident in 2018 in the McLean, Virginia, area, Metro determined that an undersized bolt and torqueing issues caused the trains to detach.

Metro Chief Safety Officer Theresa Impastato said that it was too early to know if the two incidents were connected.

Impastato did however admit in a Metro Board meeting Thursday that evidence was not secured properly, but not because employees were trying to hide something.

“There were no attempts made of nefarious origin; we believe that this was the result of a lack of clear and consistent communication, and enabled by gaps in our process of securing evidence,” she said.

One of the major gaps appears to be basic training procedures.

“Currently, employees who may be tasked with supporting an investigation do not receive any training on their role in that function,” Impastato said.

Proper chain of custody in a situation like this could have been something such as applying shrink wrap to the coupler that failed so that no one could touch or manipulate the parts.

Looking ahead, Impastato said Metro is working to apply lessons learned in the recent Red Line situation and others to properly handle evidence in any future incidents.

At the meeting Thursday, several Metro Board members also expressed concern that there was no way to communicate with the passengers stranded after the cars they were riding in had detached.

Because the trains separated, there was no way to communicate with passengers in the six cars that were left stranded. Board member Michael Goldman said it troubled him that there was no protocol to get someone from Metro on a stranded train more quickly to help passengers.

“It troubles me greatly that after we had an incident a year or so ago in McLean that we didn’t have procedures in place that would deal with the communication problem,” Goldman said.

Some of the 103 passengers were trapped on the stranded train cars for almost two hours.

Metro said it will complete its investigation into the incident in the 60-day timeline required by law.

2 Virginia Metro stations to close on weekends until March 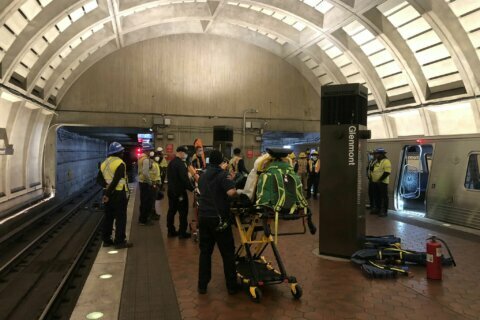