Metro is canceling a planned Green and Yellow Line shutdown next summer that the agency had announced in 2018, WTOP has learned.

Internal Metro documents suggest that when Metro announced the shutdown plans, Metro did not fully understand the scope and cost of additional work at Greenbelt, College Park, Prince George’s Plaza and West Hyattsville stations, so any significant repairs to crumbling platforms could be delayed several years.

The Prince George’s County Department of Public Works and Transportation was notified of the change in October, spokeswoman Paulette Jones said Wednesday, but the cancellation of the work had not been publicly reported until now.

Metro spokesman Dan Stessel said the project could be done sometime between 2022 and 2027, when Metro is ready to do signal upgrades in the area.

“In the interest of minimizing customer inconvenience and — again — to be cost effective, we want to align these projects and tackle them at the same time. It is our expectation that the Green/Yellow stations will be moved somewhere between 2022-2027, depending on these other projects. Strategic, cost effective — not a lack of understanding,” Stessel said in an email.

As of Wednesday afternoon, the stations had not even been removed from Metro’s own published list of locations where major work is planned next summer, but after WTOP asked Metro for a response to this story, Metro issued a news release late in the day acknowledging the change to the work schedule.

“In order to be more cost effective, four Green/Yellow stations that had been considered for platform reconstruction next summer will be rescheduled to a later phase of the project,” the statement said.

It still lists the Green and Yellow Line stations as scheduled for platform repairs in the future, but Metro Board budget documents suggest the work would not be done for six to 10 years.

Metro will still move forward with plans for a major Orange and Silver Line disruption next summer for platform repairs and other station work along a 7-mile stretch of tracks.

Planning documents for that Orange Line shutdown allow for complete closures of the Vienna and Dunn Loring stations from Memorial Day weekend to as late as Labor Day weekend.

Specific Orange and Silver Line service details will be released around March, Metro said, but the agency confirmed WTOP’s earlier reporting that Vienna and Dunn Loring are scheduled to be closed, and that riders will not be able to get on or off trains at East Falls Church.

Silver Line stations will also have reduced service during the shutdown due to the single-tracking through East Falls Church.

During the shutdown, additional trains are likely to run between Ballston and New Carrollton to limit the service cut downtown and in Maryland.

A contract for that Orange Line work is expected to be awarded by the end of this month. Metro expects the work to cost around $200 million. Metro is also separately set to award a contract early next year for shuttle bus operations during the track work.

Metro had not moved forward with the procurement process for Green and Yellow Line construction work. But until now, it had been unclear why.

The total shutdowns of stations or tracks allow for more work to be done than under past methods, Metro said. The work includes platform repairs and improvements, new lighting, new digital screens and new surveillance systems. 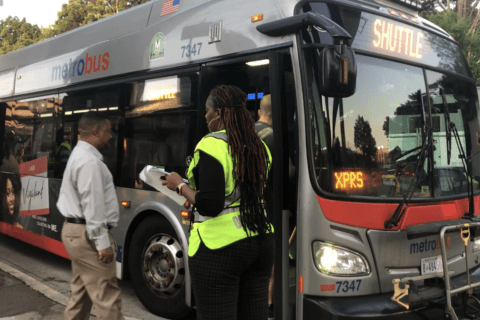