Metro will otherwise run on a holiday schedule most of the day, including opening at 7 a.m. instead of the 5 a.m. opening on a weekday that is not a holiday.
Listen now to WTOP News WTOP.com | Alexa | Google Home | WTOP App | 103.5 FM

WASHINGTON — Metro will close at 11:30 p.m. Wednesday, July 4, about two hours after fireworks end on the National Mall.

That is the regular closing time now for the system Monday through Thursday nights.

Metro will otherwise run on a holiday schedule most of the day, including opening at 7 a.m. instead of the 5 a.m. opening on a weekday that is not a holiday.

The rail system will run on a weekend schedule until about 6 p.m., when Metro will increase service for fireworks crowds. Trains are expected every 8 to 10 minutes downtown on each line after 6 p.m., with more frequent service where lines overlap.

While the Smithsonian station has an exit in the middle of the National Mall, it is often extremely crowded on July 4, so Metro recommends using the many other stations very close to the Mall to avoid transferring from one line to another in the system and to make trips easier overall.

Arlington Cemetery and the National Mall entrance to Smithsonian are scheduled to become entry-only after 9 p.m. to help handle crowds leaving after the fireworks end just before 9:30 p.m.

Due to the holiday, parking is free July 4 at all Metro-operated lots and off-peak fares are charged all day.

Metrobus will be on a Saturday schedule with detours in place for routes that usually go near the National Mall. Other regional bus systems also operate on weekend or holiday schedules. MetroAccess subscription trips are canceled, so any trips must be booked by 4:30 p.m. July 3.

Bikes and large coolers are not allowed on the rail system on the holiday, although people who bike down to the National Mall without using the rail system will be able to dock Capital Bikeshare bikes or lock their own bikes in several locations.

Metro also recommends all riders ensure they have enough money loaded onto their SmarTrip cards for a round trip to avoid problems and delays getting home.

Virginia Railway Express no longer runs Firecracker Special trains for July 4. MARC plans to run a Saturday schedule on the Penn Line only. 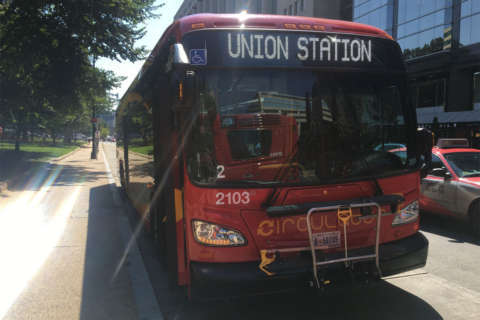