Metro rejected the ad for an American Civil Liberties Union conference next month on the basis it violated policies against ads intended to influence public policy. The ACLU said it merely promotes an upcoming event. “If Ringling Bros. can advertise for people to come to their circus, the ACLU should be able to advertise for people to come to its conference,” the ACLU wrote in its motion.
Listen now to WTOP News WTOP.com | Alexa | Google Home | WTOP App | 103.5 FM
(1/3) 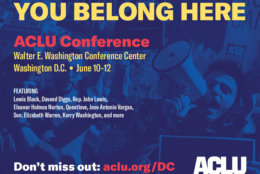 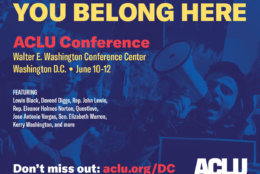 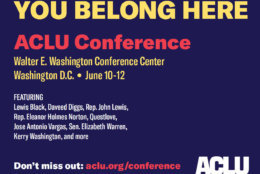 WASHINGTON — Metro has rejected an ad for an American Civil Liberties Union conference next month, prompting the ACLU to ask a judge Friday to order the transit agency to post the ad.

ACLU of D.C. Legal Director Arthur Spitzer said he is not sure exactly why Metro rejected the initial ad, which promoted the conference, listed some high-profile speakers, and included a website that provides more details. The words were overlaid on a photo of apparent protesters holding signs like “refugees welcome” and “stop profiling Muslims.”

Metro set the ad restrictions in 2015 after an anti-Muslim activist attempted to place ads depicting the Prophet Muhammad. National legal precedents generally allow Metro to ban certain types of ads as long as the rules are applied evenly and do not discriminate based on particular viewpoints.

The Archdiocese of Washington, ACLU and other groups have ongoing challenges to Metro’s advertising policies that have now reached the appellate court level. Those challenges generally argue that Metro’s policies are too broad or not fairly interpreted by the agency.

Metro has said the rules are necessary to keep riders and workers safe from people who could be offended by ads and keep people comfortable with using trains and buses.

The church’s case over Christmas ads has already been argued, and could be decided at any time. A ruling from the appeals court would shape the remaining cases in the lower court.

The ACLU filed its request for a temporary restraining order or preliminary injunction as part of one of the other pending cases that had been on hold until the appellate court rules.

“This one is different, because I don’t frankly see what argument Metro can even make that this is an issue ad … it’s just an ad that says, basically, please come to our membership conference,” Spitzer said.

Spitzer said he expects a ruling on this ad from Judge Tanya Chutkan next week.

Metro typically does not comment on pending litigation, but the judge Friday afternoon ordered Metro to respond to the ACLU motion by Sunday evening. She set arguments on the issue for Tuesday afternoon.

The ad for the national ACLU conference at the Washington Convention Center June 10-12 was planned to run from May 28 through June 12 at 45 locations in Metro stations and on the sides of 75 buses. The ACLU would have paid $90,000.

The ACLU’s legal team was only consulted after Metro rejected the initial ad last Thursday, because the marketing team believed the ads would be accepted, Spitzer said.

Spitzer said the ACLU could not get specific details from Metro — via the transit agency’s advertising contractor — about why the ad was found objectionable. The alternatives were meant to address any possible concerns, he said.

As of Friday afternoon, Metro had not provided a response to those alternatives through regular advertising sales channels.

If there is not a decision to post the ad by early next week, it would likely be too late to get the ad printed and posted in time for it to be effective at making people aware of the conference, Spitzer said. 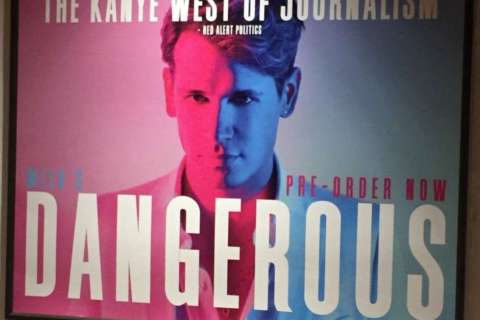