The 10-story escalators that went into service at the Bethesda station replaced ones that had been in service since 1984 and were the final step in an $8 million project that took about two and a half years.
Listen now to WTOP News WTOP.com | Alexa | Google Home | WTOP App | 103.5 FM

WASHINGTON — Metro’s newest ride? The three new escalators that opened at the Bethesda station on Wednesday.

The entrance escalators that went into service were the final step in an $8 million project that took about two and a half years, Metro said in a statement.

The old escalators had been in place since 1984, and the daily grind had gotten to them. They weren’t the only ones, Metro General Manager Paul Wiedefeld said: “Back in 2010, Metro’s escalators were a symbol of infrastructure neglect and decay.” Now, he said, they’re in service nearly 94 percent of the time.

The escalators at the Bethesda station are 10 stories high — the second-longest in the Western Hemisphere; the longest are at the Wheaton station. Metro owns nearly 450 escalators, which Wiedefeld said made the agency “the biggest owner of escalators in the U.S. and Canada.”

That made replacing the Bethesda escalators no easy job, Wiedefeld said: “It’s sort of like building a ship in a bottle, but … you first have to take the old ship out.” 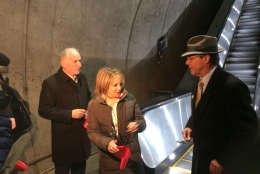 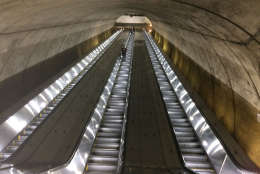 The new escalators also have speakers that broadcast safety advice, including asking people to stand to the right.

The station also got a new stairway and better mezzanine lighting; two new escalators between the mezzanine and the platform have already been installed.

In all, Metro is in the middle of a $151 million plan to replace more than 130 escalators by the end of the decade, the agency said in the statement. They’ve installed new escalators at 21 of their 91 stations since 2011.

Next up: Friendship Heights and Medical Center.