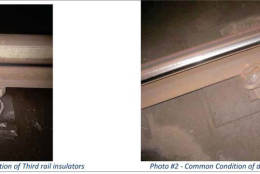 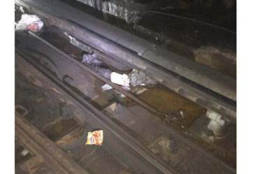 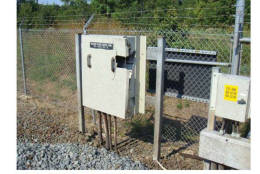 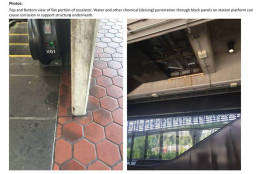 WASHINGTON — New documents from the Federal Transit Administration reveal Metro lacked a program management plan before starting 24/7 track work, emergency exit pathways were nearly pitch black, there were problems with tracks in rail yards identified after a derailment and a new communications failure.

The FTA on Wednesday also updated information about corrective action plans that Metro must submit to address significant issues.

While 126 plans are not yet due, 59 of the 251 total have either not been submitted or are otherwise past due based on when Metro estimated it would be able to submit them. Among those past due are plans for detailed tunnel ventilation procedures and an assessment of ways to improve the ventilation system in response to smoke incidents. The FTA has rejected some plans Metro did submit and approved others.

This month, a plan to improve technical training for operations and maintenance was closed.

September inspection reports from across the Metro system identify locations where tracks were not properly secured and emergency communication or exit paths had potential problems.

In one case, a track that should have been taken out of service instead was placed on a slow speed limit. The so-called “black condition” was identified between Friendship Heights and Dupont Circle due to problems with defective fasteners allowing the rails to move back and forth or sink. A federal inspection report notes a 10 mph speed limit was put in place, and a follow-up report the next day noted some temporary repairs being made.

On other tracks where passengers are traveling, inspectors spotted more loose or missing fasteners that could prove dangerous and continued water issues in tunnels that could still cause problems even as some pools of water have been cleared.

On Sept. 21, a 600-foot stretch of track and two 200-foot stretches of track were identified on the Green Line between Greenbelt and College park where there are many rail ties that are crumbling and related issues that are allowing rails to slide back and forth. This area is planned to be the focus of a track work “surge” in March or April.

Other issues identified include many tunnel lights that were out, limiting visibility for workers or for riders who may need to use an emergency exit.

On Sept. 13, inspectors noted all tunnel lights were out for a stretch between Bethesda and Grosvenor stations. On Sept. 14, inspectors noted similar problems in “many” sections of the Red Line from Friendship Heights to Dupont Circle. On Sept. 20, similar issues were identified between Forest Glen Station and the point where the tracks go above ground.

On Sept. 6, federal inspectors went to the Alexandria Rail Yard where two railcars had completely left the tracks in a derailment just a few days before. They found problems with a lack of effective cross ties similar to issues at the site of a derailment near East Falls Church in July, and found other tracks that were not properly secured and had to be taken out of service. Other inspections at other rail yards also identified problems.

Federal inspectors are also focused on the emergency phones along the tracks that also allow power to be cut in emergencies.

Metro is planning a $21 million project to upgrade the phones and trip stations. As of Sept. 10, Metro records indicated 1,933 of the phones across the system were working and 61 were not. About 400 more will be added when the second phase of the Silver Line opens in a few years.

Inspectors also checked out the Rhode Island Ave. Station where concrete crumbled just before Labor Day, and recommended changes to prevent corrosion at the top of the platform escalator since there is no way for water to drain from the area.

Train operators were still speeding by inspectors in September, even though they are supposed to slow down to pass workers. This batch of reports does not include the incident in October when federal inspectors were nearly struck by a speeding train near Reagan National Airport.

A worker who was supposed to be a key line of protection for work crews during “Surge 9” on the Orange Line failed to stand in the proper position, and failed to respond to a radio call.

The inspection report for the incident during 24/7 track work at the Virginia end of the Orange Line, notes that the worker “could not be reached by the company radio” despite being less than 150 yards from the station platform.

The worker was supposed to be standing at least 500 feet from the work crew to signal any vehicles that could be moving through the work zone. Instead, in violation of safety policies, he was next to the workers chatting with them.

He did pick up his cellphone when the worker who had been trying to radio him called instead.

While in many cases inspectors observed proper radio communication, in they also noted radios not working in tunnels, including in one area between Friendship Heights and Bethesda.

An FTA contractor is now overseeing Metro’s so-called “SafeTrack” work. The initial oversight report released Wednesday covers work through August, and identifies a series of major issues for the estimated $118,797,984 of work.

While nearly all planned work was completed during “Surge 7” on the Red Line, Metro crews left many more issues to address in “Surge 8” at the other end of the line.

The work was extended three days to allow for work on two crossover tracks following a July derailment on a similar crossover near East Falls Church.

While that work was done, new safety recommendations and heat, humidity and thunderstorms slowed work and left maintenance, crosstie work and welding unfinished. Metro leaders have emphasized the importance of getting crosstie work done during longer shutdowns because of the length of time it can take to set up and break down.

Maintenance crews were also only able to clean up trash and weeds from about 1,692 feet of the 22,000 feet of track involved in the surge to address drainage and fire hazard issues.

The oversight report said Metro submitted a program management plan for review on Sept. 30 that would address scheduling and how to finish work that is not completed in a surge zone.

“No plan was developed before this project began,” the report said.