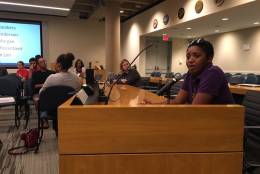 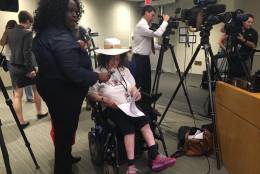 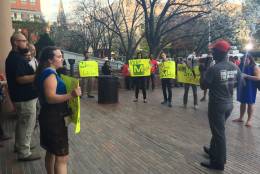 Many concerns focused on workers with shifts that end near or after midnight any day of the week, and for the impact on social experiences and night life.

Several speakers emphasized that for many people, Metro is not a choice, but a necessity.

Metro General Manager Paul Wiedefeld argued outside the hearing that Metro needs to be closed for more hours to help make work more efficient. He suggested that 1 a.m. closings on weekend nights with 11:30 p.m. closings on weekdays and shaving hours off Sundays appeared to be the most agreeable solution at the moment, but he could not promise that the Metro Board would agree to any changes.

Metro Board Chairman Jack Evans, speaking on his own behalf, mentioned at the start of the hearing that if the board takes no action, Metro would revert to 3 a.m. closings on weekends in June.

Previous to Metro’s 24/7 track work — which moved the rail system closure to midnight every day of the week, Metro closed at midnight on weekdays and 3 a.m. on weekends.

Other D.C. leaders expressed concerns about whether Metro actually needs to close for the additional hours.

Lessie Henderson with Prince George’s Advocates for Community Based Transit was among those who said Metro’s regular hours are crucial.

“Many people are going to be stranded, and they are going to be unemployed, especially if their jobs will not be able to work with them … because of this schedule that is now even on the table because of years and years of mismanagement from this organization, and it’s completely disgraceful,” she said.

A number of workers, such as Justino Gomez of Hyattsville, said earlier closing hours could make work impossible or simply unaffordable.

He said through an interpreter that he works as a janitor near Farragut Square.

“If the hours of service of the Metro are cut, it will be a disaster for service workers,” he said.

He estimated that taking a cab home would cost about $35, which would make paying his bills tough, and sending money to his daughter at college in El Salvador even harder.

A number of commenters expressed their preferences in the event that Metro does cut service.

Several people supported plans that would maintain 3 a.m. service at the expense of slashing hours to open at noon Sundays, while others called it a complete non-starter.

Others suggested Metro would not even need the additional track time if the agency actually took advantage of the track time it has now, and took better advantage of single-tracking opportunities.

Some Virginia leaders have expressed support for the service cuts, if that is what Metro leaders believe is necessary.