Blue Line riders at Franconia-Springfield and Van Dorn Street Metro stations will continue to be affected, as summer winds down and traffic is expected to surge as students go back to school.
Listen now to WTOP News WTOP.com | Alexa | Google Home | WTOP App | 103.5 FM

Here are three things to know this week:

With the final school systems returning to class after Labor Day, and the traditional end of summer, expect morning traffic on the roads to spike.

Commuters who decide to drive rather than use the Blue Line at Franconia-Springfield or Van Dorn Street Metro stations would add to delays.

During the week, the single-tracking significantly reduces the usual number of trains at Franconia-Springfield and reduces the number of rush-hour trains at Van Dorn Street. At Franconia-Springfield, trains are scheduled every 24 minutes at rush hour, and there are no Yellow Line “rush-plus” trains. Those Yellow Line trains are running to and from Huntington instead.

Commuter buses or other service from park and ride lots may work better for some people.

Read more in the full track work guide for this surge.

Next weekend, Sept. 10-11, Metro plans another complete shutdown in the area. Franconia-Springfield will be closed Saturday and Sunday. Separate single-tracking is scheduled to impact other lines.

The next work zone begins Sept. 15, with six weeks of weekday single-tracking on the Orange Line between Vienna and West Falls Church.

Metro will soon announce a revamped plan for further work zones. The changes were prompted by revelations about the breadth of failures in track inspections and new problems identified by federal investigators. 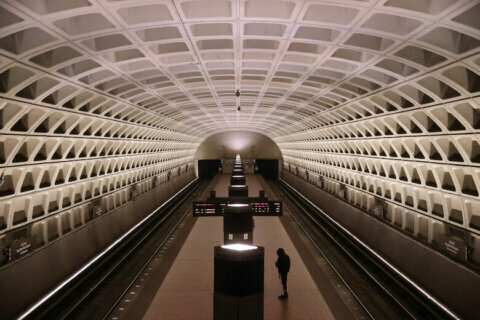