On Friday night, skywatchers worldwide can see Mars rise in the southeast at sunset. And, for those in the Eastern Hemisphere, the sky will also feature the longest total lunar eclipse of this century.
Listen now to WTOP News WTOP.com | Alexa | Google Home | WTOP App | 103.5 FM
(1/5) 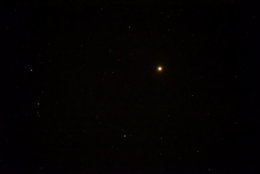 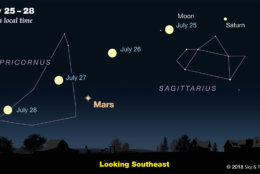 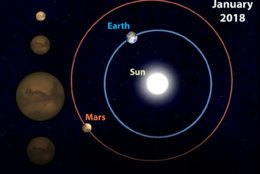 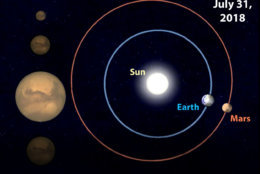 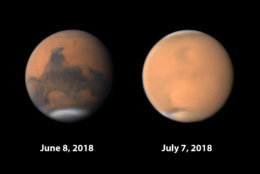 On Friday night, skywatchers worldwide can see Mars rise in the southeast at sunset. And, for those in the Eastern Hemisphere, the sky will also feature the longest total lunar eclipse of this century.

Mars will be directly opposite the sun Friday at 1 a.m. EDT and will rise with the full moon in the southeast at sunset. Mars will be amazingly bright and reddish-orange to the lower right of the moon all night long. The red planet won’t be this bright and close again until Sept. 15, 2035.

Mars has been in the news lately as scientists announced possible evidence of a subsurface lake near the Martian South Pole.

It also experienced a planet-wide dust storm that threatens the Mars Rover Opportunity, which is solar-powered. “Oppy” is still in a sleep mode as it rides out the storm, which has reduced the sunlight to the point where the rover is getting no power. It is hoped Oppy will survive.

Curiosity, which is nuclear-powered, is doing fine and making observations of the storm.

The Hubble Space Telescope released incredible pictures Thursday of Mars and Saturn that shows storms on both planets.

Griffith Park Observatory will be carrying a live viewing of the red planet via the internet on Tuesday from 1 a.m. to 4:30 a.m. EDT.

Even though people can’t see the total lunar eclipse from the U.S., folks can watch it on the internet via several outlets, on Friday starting at 1 p.m. EDT.

Venus, Jupiter and Saturn will also be seen gracing the skies after sunset.

Venus is in the west right after sunset and very bright.

Then, mighty Jupiter will be seen in the southwestern sky. Jupiter is currently the fourth brightest object in the night sky — only the Earth’s moon, Venus and mesmerizing Mars are brighter.

For those who have binoculars, take a look at Jupiter and there should be up to four small “stars” next to it. These are the four main moons of Jupiter, discovered by Galileo in January 1610. A free, downloadable software program can reveal which moons a sky-gazer is seeing. For binoculars, use “direct image” view.

To the left, or east, of Jupiter is dimmer Saturn, which is visible as it gets dark. Saturn is a yellowish-white color that stands out in the eastern boundary of the Milky Way, which is a glorious sight from dark sky sites.

For those planning on heading to a dark sky site soon, the Milky Way is in its summer glory right now. When it gets dark after 10 p.m., the Milky Way stretches across the sky from the northeast to the south and is quite the sight to see.

In North America, 80 percent of people cannot see the Milky Way because of light pollution. At Shenandoah National Park, it is easily visible now on a clear, moonless night, and the eastern seashore affords good viewing as well.

This summer, the park is offering a variety of astronomy-related events, including some by yours truly. The park is the place to be to see the planets and the Milky Way, and to look through telescopes.

So, save the date: From Aug. 10-12, Shenandoah National Park is hosting its third annual “Night Sky Festival.” There will be telescopes, ranger-led astronomy activities and, best of all, the Perseid meteor shower on the night of Aug. 12-13.

We’ll see you there!

Watch live: Total lunar eclipse as seen around the world