There is a well-known axiom in astronomy: Every time there is a new telescope with new technology, there will be new discoveries.
Listen now to WTOP News WTOP.com | Alexa | Google Home | WTOP App | 103.5 FM
(1/6) 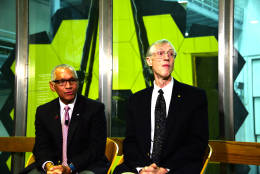 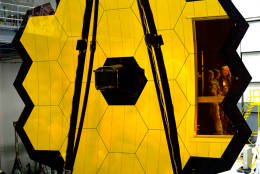 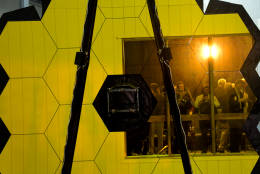 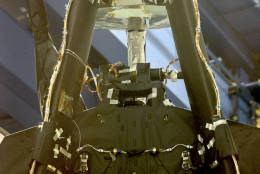 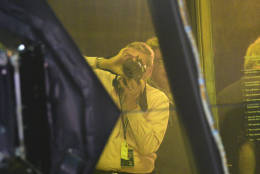 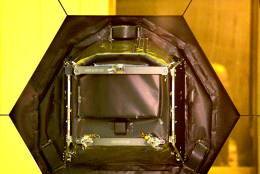 If all goes according to schedule, JWST should be in space two years from now on its way to a point a million miles from Earth called L2.

At L2, the telescope will cool to just 50 degrees above absolute zero (-400 degrees F) and will never see the light of day — literally — for its nominal five years of science operations.

Unlike the Hubble Space Telescope (HST) — which has been in low earth orbit for over 26 years — JWST has to be protected from the light and heat of the sun, Earth and moon in order to operate. Shielded by a five layer sunshield the size of a tennis court, JWST will be in perpetual darkness and cold so that its 18 gold-covered beryllium mirror segments and sensitive instruments can collect infrared light from our solar system and from 13.5 billion years ago. Three ounces of gold — an excellent reflector of infrared light — covers the primary mirror segments, which total 6.5 meters in diameter, and the secondary mirror. For comparison, HST’s solid mirror is 2.5 meters across and uses aluminum to cover its primary and secondary mirrors.

NASA prefers to think of JWST as the successor to HST, not the replacement. It is hoped that the two space telescopes can work together to observe the universe jointly, thereby affording different perspectives in terms of data obtained as well as field of views of planets as seen from low earth orbit versus a million miles from Earth.

I have been following the progress of JWST for years, a major undertaking that has taken 20-plus years so far. When I was at Goddard last year, the 18 primary mirror segments and the secondary mirror, which directs light from the mirror segments into the instruments of JWST, were still in storage and the instruments being tested. I was amazed to see the telescope and instruments, known as the optical telescope element, of JWST assembled — it is big! When you consider that there is still the integration of the spacecraft bus and sunshield to the telescope to be performed, JWST really gets big.

A major optical test called the “center of curvature” test has just been successfully completed at Goddard. The test determined the condition of JWST’s optics so that after upcoming vibration and acoustic testing is completed, the optics can be tested again for any changes. This before and after comparison is crucial to ensure the optics are to specification. There will be more optical testing for JWST in “space-like conditions” in the near future in Texas to make sure focus can be achieved.

You may recall that HST had a “focus problem” when the first pictures were taken with the telescope. Upon analysis, it was determined that the “world’s most perfect mirror” has been made to the wrong specifications and could not see clearly. A space shuttle repair mission conducted by NASA astronauts installed “contacts” on HST and the rest is history, along with the treasure trove of data and pictures collected.

There are currently no plans for JWST to be visited by astronauts like HST was — there were five HST servicing missions — and it was not made with this capability in mind. If there is a problem with JWST that potentially could be fixed by astronauts, this will have to be addressed accordingly by NASA. NASA will soon have the hardware to get to L2 in the form of the Orion-manned spacecraft and the space launch system (SLS).

To give JWST the highest probability of success, testing and more testing is the name of the game. There are 180 deployment steps that JWST must accomplish in the right sequence, at the right time and to correct specification in order to work properly.

Only a half dozen of these are not “show stoppers.” From launch in French Guiana using the European Space Agency’s (ESA) Ariane 5 rocket to arrival at L2, it will be an interesting few weeks for the JWST team.

There is a well-known axiom in astronomy: Every time there is a new telescope with new technology, there will be new discoveries. JWST certainly fits this standard given its cutting edge design, instruments and capabilities.

New composite material had to be invented to withstand the rigors of launch and deep cold in order to provide a rock solid foundation for the telescope and its four instruments: 9,000 bonding points using aviation grade epoxy hold the composite structure together; a micro shutter provides 250,000 slits that can precisely define the light pattern entering the telescope and allow up to 100 objects being observed simultaneously; and the Cryocooler will take one instrument down to only 7 degrees above absolute zero (-452 degrees F).

JWST will allow astronomers to see the faintest infrared glow emitted by the very first stars and galaxies 400 million years after the big bang; to make observations of our solar system from Mars outward to include Pluto and the farthest reaches beyond; and to learn about exoplanets and the origins of life. JWST also promises to reveal the unknown to us, which is most exciting.

It will take about six months after launch before JWST is ready to observe the universe. Oh, the sights we will see — I can hardly wait.

JWST is an international collaboration between NASA, ESA and the Canadian Space Agency.

Follow me at Twitter @skyguyinva and my daily blog to keep up with the latest news in astronomy and space exploration. You can email me at skyguyinva@gmail.com.