A man was arrested in Stafford, Virginia, after he allegedly tried to pass counterfeit $100 bills at local restaurants and other businesses.
Listen now to WTOP News WTOP.com | Alexa | Google Home | WTOP App | 103.5 FM

A man was arrested in Stafford, Virginia, after he allegedly tried to pass counterfeit $100 bills at local restaurants and other businesses, the Stafford County Sheriff’s Office said.

On Thursday, an employee at Panera Bread in Stafford Market Place took notice when the suspect attempted to pass a bogus $100 bill for his order. They said he was unsuccessful with the purchase and left behind the forged currency, the sheriff’s office said.

After his vehicle was identified in the parking lot, the suspect was located nearby at a Jersey Mike’s Subs holding a Starbucks Iced Coffee, the sheriff’s office said.

Police say that when an officer approached Cartledge as he was leaving the sub shop, the suspect ran away into the strip mall toward the Best Buy.

At one point, the suspect tossed his coffee onto the sidewalk at the mall and returned to his car, the sheriff’s office said.

After a nearby officer ordered the suspect to the ground, officers handcuffed Cartledge and attempted to place him under arrest. Police say they used a dose of pepper spray to get handcuffs on the suspect after he had resisted arrest.

After an investigation, the sheriff’s office said that fraudulent funds had been passed at Starbucks and Bob Evans in the same area.

A total of seven forged $100 bills were seized in the alleged crime spree, the sheriff’s office said.

Cartledge is currently being held without bond at the Rappahannock Regional Jail.

The Stafford sheriff’s office is urging businesses in the area to check their $100 bills to ensure they are not counterfeit.  Anyone with information on this case is encouraged to call police at 540-658-4432.

Area in Stafford where counterfeit bills have been discovered. 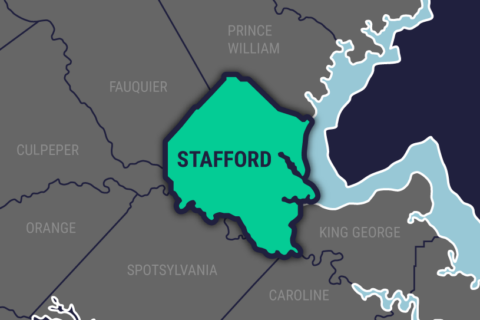