Stafford Co. mom treks through snow to get to hospital for daughter’s birth

The winter storm that hit Monday put stress on everyone in the region, but imagine if you or a loved…
Listen now to WTOP News WTOP.com | Alexa | Google Home | WTOP App | 103.5 FM
(1/4) 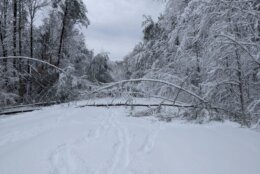 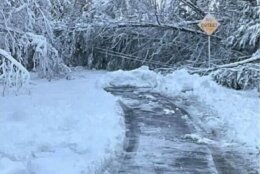 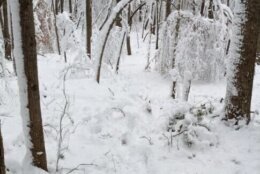 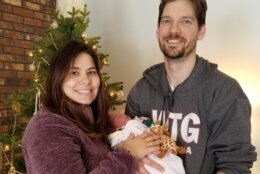 The winter storm that hit Monday put stress on everyone in the region, but imagine if you or a loved one went into labor among all the chaos. One Stafford County, Virginia, couple had to trek through the woods that night in a foot of snow to get to the hospital and have their baby.

Noel was already several days past her due date on Monday, when about a foot of snow pummeled her Tackett Mill area home that morning.

Her water broke around 5 p.m.

Earlier that afternoon her husband, Kris, cut three trees out of his driveway and went scouting down their country road to see if they could get out.

He counted dozens of trees blocking their small, dead-end road. A quarter mile away from where their road meets the main drag, he ran into a wall of snow-covered trees.

“And I started to try and see if I can squeeze through it and then I stepped on something. I looked down and it was a power line in the snow,” Kris said.

Kris was sure that they would never get through tree blockade if his wife went into labor. He went back to his house, and sure enough, a couple of hours later, Noel needed to get to the hospital.

They tried frantically to get an ambulance to get close to the house, but the roads weren’t the only thing jammed up. They both had trouble getting a signal from their rural home.

“After the contractions started, that’s when we said we have to call 911,” Kris said. “And we both dial 911 and it wouldn’t it didn’t go through. It didn’t even try to ring actually … nothing happened.”

“I mean, having a home birth, with no electricity, no running water. Not ideal, not an ideal situation,” Noel said.

They were able to get some texts out to family.

Kris’ parents even responded with pictures taken from an old survival manual on how to deliver a baby at home. His mom told him some of the most important things to have on hand for a home birth, as she had some of her own.

Noel meanwhile texted her mother who had a close friend at Stafford County Fire and Rescue. Her mother was able to get a rescue team dispatched to the house.

Kris quickly ran outside and put a strobing flashlight on their mailbox to signal the coming crew. He then waited with his wife and three other children for what seemed like an eternity. It was actually around 30 minutes, Kris later recalled.

Kris was worried that the crew would not be able get through the thick wall of downed trees and snow.

Kris said a text he got from his friend put him more at ease.

They were right. Two members of  Stafford County Fire and Rescue came to the door hauling large packs of equipment. Kris even saw “one of them was not even wearing a coat. He just had a T-shirt on.”

The crew had to climb over the fallen trees and pass all their equipment through branches and downed power lines. They informed the expectant couple that there was no way they were going to get them out through their street.

They highly advised delivering the baby right there at the homestead.

But the week before, a doctor told Noel that there could be some minor complications with birthing her fourth child. This made Noel adamant about getting to the nearest hospital.

They devised a plan — they would walk through their backyard property onto their neighbors’ property and finally to a parallel street that was accessible to the ambulance. The only thing in their way was thick woods, icy cold creeks and foot-deep powder.

At this point, Noel said she was having contractions about two minutes apart, but she put on her boots and thick winter coat and she, Kris and one of the medics began the hike to the neighboring street.

While it was only around a quarter of a mile, it took about 40 minutes through the thick snow and they needed to pause every time Noel had a contraction.

“I still was kind of in shock about the whole situation. But in the back of my head, I was thinking, This isn’t really happening. I’m not walking through the snow, in labor to get to the ambulance. And then going through creeks and falling-down trees,” Noel said. “I was — I was still in shock.”

But she said the rescue crew made the situation a lot lighter.

“They were cracking jokes the whole time, making me laugh. They’re like, ‘You’re Superwoman,’ … ‘I can’t believe that you’re doing this.’ Overall, I was OK.”

Once they reached the cleared road, Noel hopped in the ambulance. Kris had to go back to the house to watch the three other kids.

But Noel was not alone. One of the medics “held my hand through every single contraction. He was just so great.”

The next morning Noel gave birth to a baby girl they named Josephine.

While Kris could not be in the delivery room, he was able to call in and hear his daughter being born.

Both baby and mother are happy and healthy.