The man who killed his 26-year-old wife in 1989 and buried her remains in the median of Interstate 95 in Stafford County, Virginia, was sentenced Thursday to 40 years in prison.
Listen now to WTOP News WTOP.com | Alexa | Google Home | WTOP App | 103.5 FM

Growing up, Hansel Rodriquez, 36, was told his mother fell in with drug dealers and other “bad people,” and then abandoned the family in 1989, when he was a child.

In reality, his father had killed her and buried her body in the median of Interstate 95 in Stafford County, Virginia, in a case that went unsolved for more than three decades.

Jose Rodriguez-Cruz, 55, was sentenced Thursday to 40 years in prison in the killing of Marta Haydee Rodriguez, who was 26 when she disappeared in May 1989.

That’s the maximum sentence for second-degree murder in Virginia. Rodriguez-Cruz pleaded guilty to the reduced charge in November.

In a presentence report read in court Thursday by prosecutors, Rodriguez-Cruz continued to deny intentionally killing his estranged wife, saying he gave her pills for a migraine, which led to her death, and that he buried her body alongside the highway with the help of a friend.

Her remains were found in 1991, but not identified until 2018, after Rodriguez-Cruz had pleaded guilty to killing another woman, and cold case detectives in Arlington reopened the investigation into the missing woman.

“If he had remorse, he could have told the truth,” Assistant Commonwealth’s Attorney Ryan Fitzgerald said. “He had 30 years to do it. He buried it, like he did to Marta.”

“Your version is this was not a violent death,” the judge said. “Her remains were gnawed on by animals — that’s a disposition that nobody deserves.”

The judge could have imposed a sentence of anywhere between five and 40 years.

The couple’s son, Hansel Rodriguez, was just four years old when his mother went missing. In a victim impact statement he gave Thursday, he said his father fed him the “false narrative” growing up that his mother had run away from the family.

Over time, he said he “started to put two and two together,” and began seeing a different side of his father, who had a violent temper.

“I had a to act like an ally, but it was terrifying,” Hansel Rodriguez told the judge. “I had to keep a straight face.”

He recalled his father once holding a gun to the head of another woman his father was married to. “She was on the ground, on her knees, begging for her life,” he said.

Hansel Rodriguez told the judge he was giving his statement Thursday to honor his mother. “Part of the reason I’m here is to do what I can for her sake, her legacy,” he said.

Rodriguez-Cruz is already serving a 12-year sentence in federal prison for the death of another woman — his girlfriend Pamela Butler, who was 47 when she was last seen outside her Brightwood apartment in D.C. in 2009.

Butler’s remains have been never found. But in 2017, Rodriguez-Cruz pleaded guilty to second-degree murder in her death. As part of the plea agreement, he had to help investigators search for her remains, which he said he’d buried in the median of I-95 in Stafford County.

That turned out to be the missing link in identifying the remains found in a similar spot In 1991. In 2018, DNA confirmed the remains were those of Haydee Rodriguez.

Butler’s brother, Derrick, who was instrumental in raising public awareness of his sister’s murder, and its link to Marta Rodriguez, has said he wants Rodriguez-Cruz to spend the rest of his life behind bars.

“No matter how old he gets — if he comes out at 80 years old, if he makes it that far — he’s still a violent criminal, and it’s not going to change,” Derrick Butler said in November.

Wendy Harris, a public defender representing Rodriguez-Cruz, noted he was 23 years old when his wife disappeared and said he “showed very poor judgment.” She said he grew up in a family plagued by domestic violence, was put in foster care and has had untreated post-traumatic stress disorder for decades.

Prosecutors dismissed the idea Rodriguez was in any way remorseful for his wife’s death and lambasted his explanation for how she died.

Rodriguez said the day she died, he had taken her to a hotel after work and when he left the room, she took several pills he had given her for a migraine. When he returned, he said, he found her unresponsive.

They called to the stand Detective Rosa Ortiz, a cold case detective and 20-year veteran of Arlington County police, who worked for years to put the pieces of the crime together.

“I don’t believe anything coming out of his mouth. He’s a pathological liar,” she said. Of his explanation involving the pills he said his wife took that led to her death, Ortiz said Haydee Rodriguez was afraid of her estranged husband and there’s no way she would have willingly left with him.

There was evidence Rodriguez-Cruz was violent toward his wife in the months before she disappeared, including one incident in which a police officer saw him dragging her down the street. After he was arrested, police found duct tape and rope in his car and he reportedly told an officer, “if I can’t have her, no one else will.”

During his sentencing Thursday, Fitzgerald, the prosecutor, said: “In the year before Marta died, he assaulted, abducted and attempted to rape her. And we’re expected to believe she died from an accidental overdose when he wasn’t even in the room?”

During the prosecutor’s arguments, Rodriguez-Cruz sat at the defense table, wearing a mask, looking straight ahead and taking very deep breaths that were visible through his prison uniform.

Before he was sentenced, Rodriguez-Cruz stood at the defense table, with his ankles chained and addressed his son.

“Hansel, I want to say I’m so sorry for the pain I caused you and Marta,” he said. “I was being selfish. No matter how many words I say, I will never reach the depth of your pain. I think of you and your mother every day. I’m going to ask you to forgive me. If there was a way to bring back your mother, I would give my own life. I just didn’t have the courage to face you and tell you what I’d done.”

After handing down his sentence, the judge barred Rodriguez-Cruz from having any contact with Hansel Rodriguez or other family members unless they reached out first.

Speaking outside the courthouse after the sentencing, Hansel Rodriguez, who said he has forgiven his father, said he was satisfied with the judge’s decision and called it “closure in a sense.”

“Now, nobody else will have to worry about meeting the same fate,” he told reporters. “So, I’m glad that you know, despite him being my father, he’s off the streets for good.” 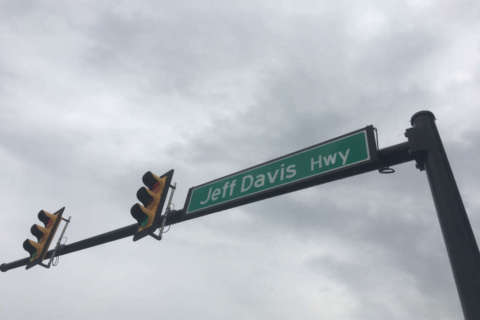