The large flag is familiar to drivers on Interstate 95 near Stafford, Virginia. The local zoning board refused to hear an appeal brought by two people who called the flag threatening.
Listen now to WTOP News WTOP.com | Alexa | Google Home | WTOP App | 103.5 FM

WASHINGTON — A huge Confederate flag can continue flying 80 feet above Interstate 95 in Stafford County after officials dismissed an appeal to have it deemed unlawful.

Stafford County’s Board of Zoning Appeals declined to consider a request to have the flag declared an unlawfully large sign on Tuesday.

NBC4 reports the board members decided the petitioners did not have legal standing to make the request because they don’t live nearby.

Clark Leming represents Patricia Joshi and Thomas Jones, who brought the appeal to the board. He said the flag affects his clients’ quality of life.

The lawyer also said the owner of the property on which the flag is planted demonstrated racial bias, and the group leasing the land supports white supremacists.

If the board had taken the case, however, the flag’s owners might have argued that it is exempt from a local rule that limits sign size because it is the symbol of a state.

But Leming said the Confederacy is no longer a state, and it should not be protected by zoning rules.

“We don’t believe that the Confederacy is a geopolitical entity under the meaning of the ordinance,” Leming said.

And even if the Confederacy were a state, Leming said the well-known flag flown under Robert E. Lee was not one of the three flags officially used by the Confederate States Of America.

Leming said he may ask Stafford Circuit Court to force the Board of Zoning Appeals to consider his clients’ complaint. Confederate flag along I-95 in Stafford Co. vandalized 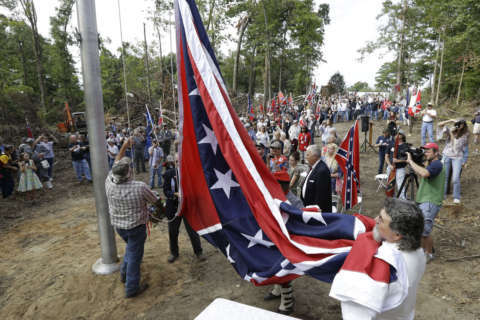