STAFFORD, Va. – They are still several years away from getting behind the wheel of a car, but officials from…
Listen now to WTOP News WTOP.com | Alexa | Google Home | WTOP App | 103.5 FM
(1/8) 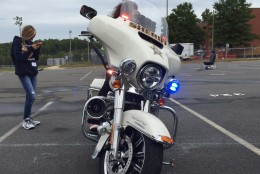 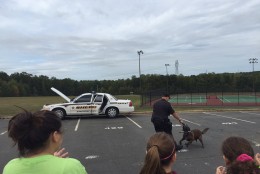 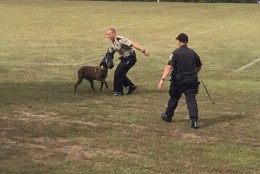 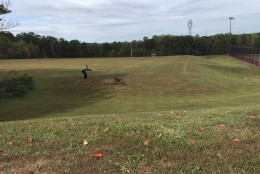 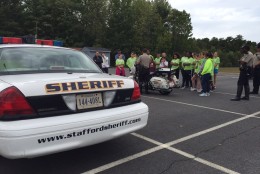 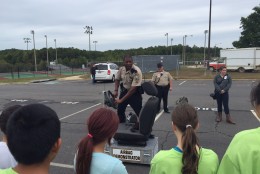 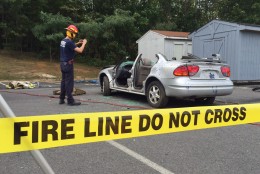 It was all part of the Youth of Virginia Speak Out About Traffic Safety’s (YOVASO) fourth annual Middle School Leadership Retreat at Brooke Point High School in Stafford County. All of students are from the county’s schools.

As part of the retreat, they learned about biking and pedestrian safety inside, but then got live demonstrations outside in the school parking lot.

Among the demonstrations were firefighters cutting off the roof of a wrecked car to show students how they extract victims from an accident, a rollover simulator to show the damage of not wearing your seatbelt and having loose items in your car while driving, a chance to sit in the back of a patrol car and a meet-and-greet with a police K9.

“There are a lot of misconceptions about police dogs being vicious,” Master Deputy Alex Smith said.

But he said that’s not true and used his demonstration to prove it.

Another deputy stood out in the field and K9 Vader went out to apprehend him. Right after he caught the deputy, Vader returned to Smith and was then calmly petted by the middle schoolers.

For him, it was a great opportunity to be able to reach back out to the community.

“With everything going on these days as far as law enforcement in general, it’s really good that we connect better to the community,” Smith said. “In all reality, we can’t do our job without the community.”

Public safety officials are tasked with promoting driving safety. But why reach out to teens who aren’t even driving yet?

“We are big on traffic safety,” said O’Neal. The goal is “to start giving that to the middle schoolers as soon as we can so that way they are a lot safer when it’s their turn to be on the road with you and me.”