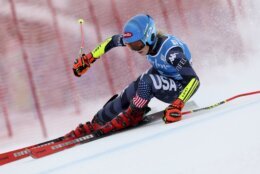 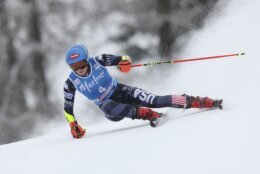 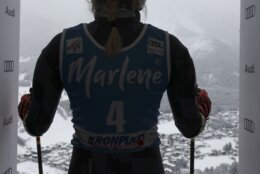 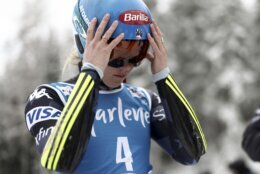 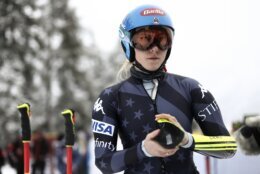 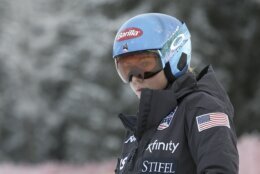 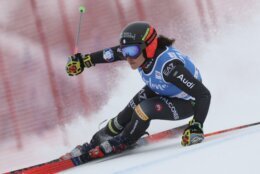 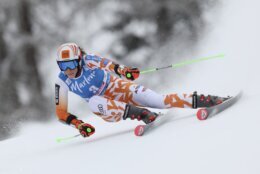 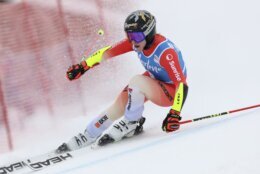 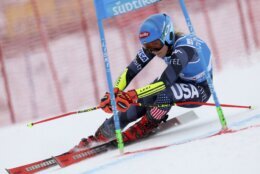 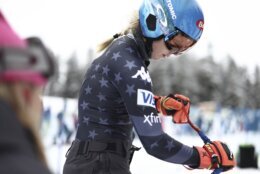 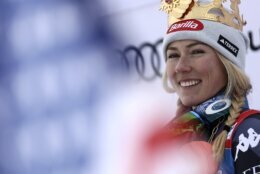 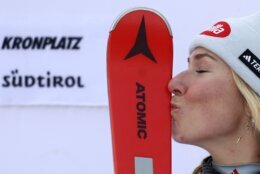 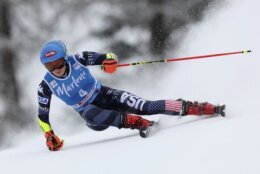 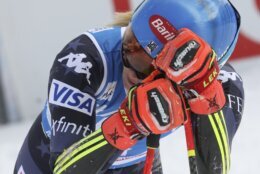 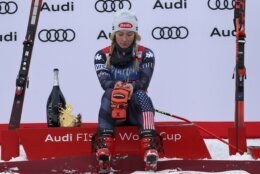 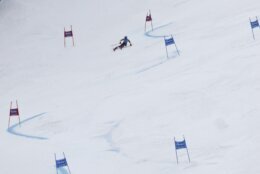 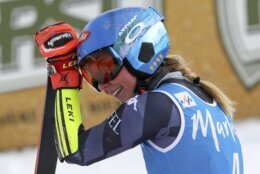 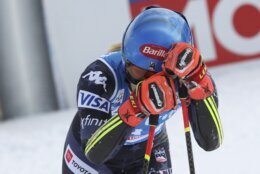 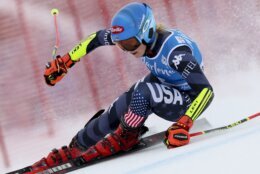 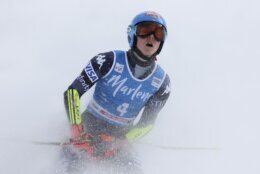 “I don’t think there are words to explain all the feelings,” Shiffrin said. “In the end of it, it’s like there’s too much excitement to feel. I don’t know if that makes sense. So it’s something you can’t explain. So I just try to breathe a bit and enjoy it.”

Shiffrin now needs only three more wins to match Ingemar Stenmark’s overall record — between men and women — of 86 victories. Stenmark competed in the 1970s and 80s.

Shiffrin led from start to finish at the Kronplatz resort in the Italian Dolomites, crossing 0.45 seconds ahead of world champion Lara Gut-Behrami and 1.43 ahead of home favorite and former overall champion Federica Brignone.

Shiffrin posted the fastest first run and was therefore the last skier to race in the second run.

“I was a bit nervous for the second run, but mostly, I hate waiting,” Shiffrin said. “Finally, when it was time to go, then it was like everything went quiet, and I just pushed as hard as I could every turn. It was pretty amazing to come through the finish and see that I was quite fast. Because I could hear that the other athletes were skiing well. I thought, ‘I could lose this, so I better try to ski a really good run.’ And it was.”

Shiffrin seemed exhausted and relieved immediately after finishing, bending over and resting her head on her poles and then biting her lips before going over to embrace Gut-Behrami and Brignone.

Unlike when she broke down into tears when she matched Vonn’s record of 82 wins earlier this month in Kranjska Gora, Slovenia, Shiffrin kept her composure during the playing of her national anthem, singing along to the words.

Then a gold-colored crown was placed atop her head.

It was Shiffrin’s ninth win of the season.

What’s more is that Shiffrin is still only 27 and could have many more years of elite racing left in her career. Vonn was 33 when she won her last World Cup event and Stenmark was 32.

“I just feel so lucky to be her teammate in this era and watching her break history every day,” said Nina O’Brien, the only other American finisher in 18th. “And she’s been really supportive as well.”

American skier Paula Moltzan was fifth after the first run but fell midway through her second run, losing her balance and getting twisted around before sliding down the mountain.

The record also comes nearly a year after Shiffrin didn’t win a medal in six events at the Beijing Olympics after entering amid big expectations. She didn’t take long to rebound from her Beijing performance, claiming her fourth overall World Cup title at the end of last season.

Now she’s the most successful female skier of all time.

“That’s a pretty good image for the sport, for women’s Alpine skiers,” said Tessa Worley, a two-time world champion in GS. “And she’s still doing amazing things. So it’s an inspiration for us to just go and keep pushing.”

Shiffrin had to learn how to handle the nerves that come with leading the first run.

“It’s still hard for me to believe that, apparently, I have the mental focus again to be strong again in the second run,” she said. “That’s something I don’t take for granted.”

Shiffrin started her second run immediately after Gut-Behrami had taken the lead by a large margin.

“I saw her from the start and then I was thinking, ‘Why did I watch? I can’t go that fast.’ So, then I was a little bit, kind of wild on some spots but it felt so clean,” Shiffrin said. “I thought I wouldn’t be faster but I thought I could maybe be close. And then, somehow, I got there to the finish and it was quite good.”

Shiffrin can quickly add to her record total in another giant slalom at Kronplatz on Wednesday. Then she has two slaloms — her best event, having accounted for 51 of her 83 victories — in Spindleruv Mlyn, Czech Republic, next weekend. That was where Shiffrin made her World Cup debut as a 15-year-old in March 2011.

If she wins all three of her next races, she could match Stenmark by Sunday.

After a short break, Shiffrin will then again be a multi-medal threat at the world championships in Courchevel and Meribel, France, which start on Feb. 6.

Sports on TV for January 30-February 5