“It was a crazy game,” Kyrou said. “It was just one of those weird games where weird stuff was happening all game long. It is one of those games where you just have to stay with it and keep battling.”

Jordan Binnington shut out Edmonton in the tiebreaker. He made 24 saves in regulation and overtime.

“It was a big character win, guys stepped up,” Binnington said. “We had to overcome some self-inflicted adversity.”

Zach Hyman, Connor McDavid and Kailer Yamamoto scored for the Oilers, who have lost two of their last three.

Stuart Skinner made one stop after giving up a goal to Kyrou in the shootout. Skinner made 29 saves between regulation and overtime.

Edmonton got off to a quick start thanks to a rare gaffe by the Blues, who were assessed an early penalty for starting an incorrect lineup.

The Oilers scored on the ensuing power play just 63 seconds into the first period. Hyman whirled around the net and slid a backhand shot under Binnington.

It was Hyman’s 14th of the season and fifth in three games.

Kyrou responded with his 11th of the season at 6:47. Oilers defenseman Darnell Nurse coughed up the puck and Kyrou blasted a shot into the top corner from the high slot.

Edmonton regained the lead with another power-play goal 4:32 into the second period. McDavid went the length of the ice, dancing around a couple of defenders before sending a perfectly placed wrist shot into the corner.

McDavid’s 27th of the season extended his point streak to 11 games.

The Oilers opened a 3-1 lead 10:36 into the third. Tyson Barrie floated a long shot on net that was tipped home by Yamamoto for his 100th career NHL point.

The Blues responded when Ivan Barbashev finessed a pass through to Thomas, and he beat Skinner for his seventh.

Tarasenko tied the game with a short-handed goal with 19.1 seconds remaining in regulation. Another Nurse giveaway led to the puck popping loose to Tarasenko, sending the game to overtime.

“We put ourselves in a position to win this game but, in the end, it’s a 60-minute game, not a 59-minute (or) 30-second game,” Oilers coach Jay Woodcroft said.

“We only got one point because we made a couple of critical errors. But that’s hockey.”

It appeared as if Leon Draisaitl had scored on his own rebound 2:22 into overtime, but it was ruled that McDavid brought the puck in offside upon video review.

McDavid was not thrilled with the ruling.

“Since I was a kid, I thought if you have possession of the puck (going over the blue line) that’s onside. If I had possession or not, I guess that’s the judgment call,” he said.

“The league’s got to clarify some of these rules. What’s a kick? What’s offside? What’s goalie interference? It kind of depends on the night, I guess. It’s disappointing. Obviously, we should never have even let it get to that point.”

The Oilers’ league-leading power play went 2 for 5 after coming into the game with 11 goals in 24 opportunities in their previous seven. … Out with injuries for St. Louis were Marco Scandella (hip) and Scott Perunovich (shoulder). Forward Pavel Buchnevich returned after missing four games because of a lower-body injury. Fellow Blues forward Logan Brown was assigned to Springfield of the American Hockey League for conditioning. He is coming back from a lower-body injury. … Out for the Oilers were Evander Kane (wrist), Warren Foegele (undisclosed) and Ryan McLeod (undisclosed).

Blues: At Calgary on Friday night. 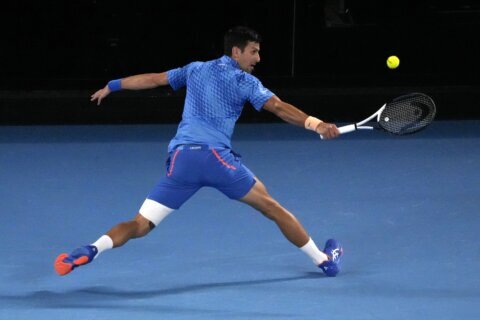