Leon Draisaitl and Ryan Nugent-Hopkins scored for the Oilers, beaten twice by New Jersey during its run. Stuart Skinner made 23 saves, but had the puck taken off his stick by Hischier early in the second period to set up the go-ahead goal by Mercer into a wide-open net.

PHILADELPHIA (AP) — Blake Coleman had a goal and two assists to lead Calgary over slumping Philadelphia.

Jonathan Huberdeau, Dillon Dubé, Rasmus Andersson and Trevor Lewis also scored for the Flames, who were playing the third contest of a six-game trip. Jacob Markstrom made 23 saves.

Tanner Laczynski and Joel Farabee scored for the Flyers, who have lost seven in a row. Carter Hart made 25 stops.

Bergeron became the fourth Boston player and 94th in NHL history to reach the milestone with the second assist on Brad Marchand’s goal at 15:08 that gave the Bruins a 4-1 lead.

Boston needs two wins to match the 1929-30 Bruins squad that started the season a franchise-best 19-2.

The Jets were ahead 3-0 before the Hurricanes scored three goals in the final 4:48 of the third period, two after pulling goalie Pyotr Kochetkov for the extra attacker with 5:33 remaining.

Pierre-Luc Dubois had a goal and two assists and Michael Eyssimont had his first NHL goal for the Jets. Blake Wheeler had two assists. David Rittich made 26 saves in his fourth start for Winnipeg. He has won his last three starts.

Jaccob Slavin, Andrei Svehnikov and Martin Necas scored for the Hurricanes, who are on a four-game point streak (1-0-3). Carolina lost for the third straight game in overtime. Sebastian Aho added three assists. Kochetkov stopped 19 of the 23 shots he faced.

TORONTO (AP) — Anthony Beauvillier scored his first goal in 11 games at 1:56 of overtime as New York rallied in the third period and beat Toronto.

Noah Dobson and Josh Bailey had the goals in regulation for New York, which got 30 stops from Ilya Sorokin.

John Tavares and Auston Matthews scored for Toronto. Erik Kallgren made 21 saves for the Leafs, who lost their fifth game of the season in OT. Mitch Marner had an assist to extend his point streak to 13 games.

Beauvillier scored his fourth goal of the season on a high shot off the rush after taking a drop pass from Brock Nelson in overtime.

VANCOUVER, British Columbia (AP) — Alex Pietrangelo scored the tiebreaking goal in the third period and had two assists as Vegas rallied past Vancouver.

William Carrier scored twice and Mark Stone had a goal and an assist for the Golden Knights (15-4-1), who overcame a 4-2 deficit in the third. Reilly Smith also scored, while Jack Eichel and Alec Martinez each had two assists.

Logan Thompson made 25 saves for Vegas.

Vancouver (6-10-3) got a goal and an assist from Andrei Kuzmenko. Bo Horvat, Luke Schenn and Elias Pettersson also scored, and Quinn Hughes had two assists.

Thatcher Demko stopped 33 shots for the Canucks, who gave up a multi-goal lead in a loss for the seventh time this season.

ST. LOUIS (AP) — Justin Faulk had a power-play goal late in the third period and St. Louis extended its winning streak to seven games with a win over Anaheim.

Faulk’s goal snapped a 1-all tie with 4:13 left in the game. The Blues’ winning streak is the longest in NHL history for a team immediately following a losing streak of eight games or more in regulation play.

Noel Acciari scored in the first period and added an empty-netter to seal the win. Jordan Binnington made 27 saves for St. Louis.

Cam Fowler scored and John Gibson made 23 saves for the Ducks, who have lost six of their last seven games.

NASHVILLE, Tenn. (AP) — Cody Glass scored off the right arm of Arizona goalie Connor Ingram in the seventh round of the shootout, and Nashville rallied for the win.

Shayne Gostisbehere had a final chance to keep the shootout going. Nashville goalie Juuse Saros made a stick save to finish off the 1,500th regular-season victory for Predators general manager David Poile.

Captain Roman Josi had a power-play goal and an assist, tying it up with a slap shot near the blue line after Arizona forward Matias Maccelli tripped Alexander Carrier. Colton Sissons dropped the puck to Matt Duchene, who put a wrister over goalie Connor Ingram for a 3-2 lead at 1:31 of the third.

Mikael Granlund scored a power-play goal and had an assist. Josi also had an assist as the Predators wrapped up a five-game homestand going 4-0-1.

Nick Bjugstad scored twice and had an assist for the Coyotes.

DALLAS (AP) — Mikko Rantanen was the only scorer in the shootout as Colorado beat Dallas.

Alex Newhook and Cale Makar scored in regulation for the Avalanche, who have won seven of their last eight games and moved within a point of first-place Dallas in the Central Division. Alexandar Georgiev made 22 saves for the Avs.

Jason Robertson scored twice for the Stars. His goal with 25.8 seconds left in the third period sent the game into overtime. Jake Oettinger stopped 34 shots.

Rantanen beat Oettinger to the glove side on the second of Colorado’s three shootout attempts.

Senators goalie Cam Talbot was pulled in the second period for Anton Forsberg after giving up three goals on seven shots. Forsberg made 21 saves. 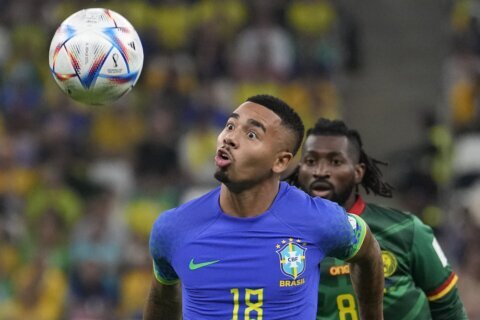