BARCELONA, Spain (AP) — Robert Lewandowski shook off his disappointing return to Bayern Munich by scoring twice to lead Barcelona to a 3-0 victory at home over 10-man Elche in the Spanish league on Saturday.

They were Lewandowski’s seventh and eighth goals in a five-round scoring streak and took his overall tally to 11 in eight games since he transferred to Barcelona from Bayern this summer.

The easy win came after Xavi Hernández’s side suffered its only loss of the season at Bayern by 2-0 in the Champions League this week. Lewandowski missed some clear chances against the team he helped lead for eight seasons before coming to Camp Nou.

Barcelona moved to the top of the league standings at one point above Real Madrid before the defending champion plays a derby at Atlético Madrid on Sunday. Athletic Bilbao continued its strong start under Ernesto Valverde with a 3-2 win over Rayo Vallecano to move into third at three points off Barcelona’s pace.

Elche was left with a hole in its backline in the 15th minute when defender Gonzalo Verdu pulled Lewandowski down when the striker was in position to latch onto a pass that would have left him all alone in the area. The referee didn’t hesitate in sending off Verdu with a direct red since he was the last defender.

Verdu, who was making his season debut after recovering from injury, recognized that his sending off hurt his team’s already tough task of facing Barcelona at their stadium.

“I hadn’t played in a long time due to injury, and to come here and start … I was very excited, but in the 15th everything went wrong. I stumbled with the striker, the ball was free in a space where he could reach it,” Verdu said. “I assume the responsibility for the result and for my team having to make a tremendous effort.”

Lewandowski opened the scoring in the 33rd when he tapped in a cross from 18-year-old left back Alejandro Balde.

Memphis Depay doubled the lead in the 41st when he received a pass from Balde, spun around his marker and fired home.

Lewandowski made it a double three minutes after halftime when he finished off a dangerous cross by Ousmane Dembélé.

Balde, who has assisted on three goals this season, has clearly won the starting job over veteran Jordi Alba, who appears to be third in the pecking order at left back, also behind new arrival Marcos Alonso. Balde has started five straight league games, while Alonso played well at Bayern.

“I am constantly surprised by what an 18-year-old can do at this level,” Xavi said. “He is in great shape and gives us a lot.”

Iñaki Williams and younger brother Nico Williams, who was called up by Spain this week, both scored in Atheltic’s entertaining win at home over a Rayo that led 2-1.

Rayo’s second goal was superbly struck by substitute Radamel Falcao, who used the side of his boot to redirect a cross while fending off Bilbao’s Iñigo Martínez.

Ander Herrera started his second stint at Bilbao eight years after first leaving the club for Manchester United. He returned, at age 33, on loan from Paris Saint-Germain.

Valencia rolled to 3-0 over 10-man Celta Vigo in the subdued debut of Edinson Cavani.

The veteran Uruguay striker, bought off the transfer market, trained for the past three weeks to get into playing shape. The 35-year-old Cavani wants to play for Uruguay in the World Cup in November.

“I was excited to finally live this moment, to run on the field, to feel the atmosphere,” said Cavani, who was substituted in the 72nd. “This is the first step.” 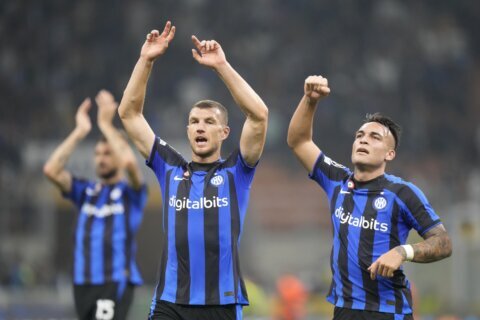 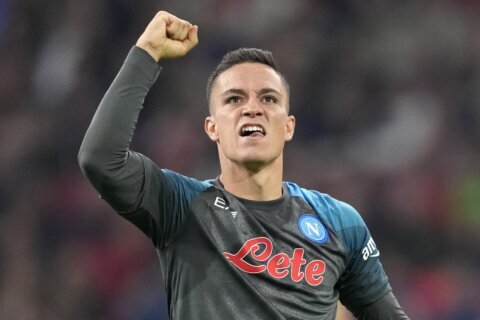