After failing to secure a transfer to a Champions League club, the star striker had to settle for playing in Europe’s second-tier competition for the first time since 2002 with Sporting Lisbon.

Ronaldo had last started in a 4-0 loss to Brentford on Aug. 13 before United chalked up four consecutive victories in the Premier League. United manager Erik ten Hag had used the Portugal star off the bench during the winning streak.

Before their opening group stage game, a minute of silence was held to pay respect to Queen Elizabeth II, who died at the age of 96 on Thursday.

Both teams wore black armbands, and the flags at Old Trafford were at half-mast.

“The club recognizes her immense contribution to public life, including sport, both here in the United Kingdom, across the Commonwealth, and around the world,” United said in a statement.

Brazilian teenager Marquinhos marked his Arsenal debut by scoring the opening goal and setting up a second in a 2-1 victory over Zurich in the their opening group stage match.

Eddie Nketiah scored the winner after Zurich equalized from a penalty awarded due to his foul as Arsenal rebounded from Sunday’s 3-1 loss to United — their first defeat in the Premier League this season.

Lazio opened its campaign with a 4-2 victory over Feyenoord but fellow Italian club Roma lost 2-1 at Ludogorets in Bulgaria.

In the third-tier Europa Conference League, West Ham rallied in the second half to beat Romania’s FCSB 3-1 in London.

The start of a match between Nice and Cologne in the ECL was delayed because of fights among supporters in the stands at Allianz Riviera stadium. Kickoff was pushed back by 55 minutes. The match ended in a 1-1 draw.

Brais Méndez converted from the spot for Real Sociedad in the second half at Old Trafford, hitting the bottom corner of David de Gea’s goal. The penalty was given for a handball by defender Lisandro Martinez. It was Real Sociedad’s first win over United in European competitions.

The duo of Nketiah and Marquinhos were involved in the decisive moments of Arsenal’s victory while United States goalkeeper Matt Turner made his debut for the Gunners following his summer transfer from the New England Revolution in the Major League Soccer.

Nketiah found the back of the net with a header in the second half that went in between the legs of Zurich goalkeeper Yanick Brecher off a cross from Marquinhos, who joined Arsenal this summer from Sao Paulo.

In the London club’s return to European soccer after one year absence, the 19-year-old Marquinhos met a cross from Nketiah from the left to side-foot into the top corner and finish off a fluent counter-attack 16 minutes into the game.

Despite Arsenal’s dominance, the hosts equalized a minute before halftime after Mirlind Kryeziu sent Turner the wrong way from the spot.

In the same Group A, PSV Eindhoven drew Bodø/Glimt 1-1.

After José Mourinho’s Roma triumphed at the inaugural Europa Conference League last season, the coach seeks his third Europa League title following his victories with Porto in 2003 and Manchester United in 2017.

Center forward Tammy Abraham was not available for Mourinho because of a shoulder issue.

Lazio put the result against Feyenoord beyond doubt at Stadio Olimpico Rome, netting three inside less than half an hour, with Luis Alberto, Felipe Anderson and Matías Vecino scoring a goal each. Vecino added his second in the second half before Santiago Gimenez pulled two back for the Dutch team.

Italian authorities have banned the Dutch club’s fans from traveling to Rome after its supporters clashed with police and damaged a historic fountain during a 2015 trip to face Roma.

Michy Batshuayi came off the bench to give Fenerbahce a 2-1 home win over Dynamo Kyiv.

Willian José converted a penalty in first-half stoppage time and added another later for Real Betis’ 2-0 victory at Helsinki.

West Ham’s Jarrod Bowen canceled out Andrei Cordea’s first-half strike by netting from the spot before goals from Emerson and substitute Michail Antonio secured a victory at London Stadium, in a boost for the Hammers after a poor start to the Premier League season.

Francis Coquelin struck a minute from time for Villarreal to seal the victory.

Villarreal was in the Champions League semifinals four months ago but had to settle for the Europa Conference League after finishing seventh in Spain last season.

In the second edition of the Europa Conference League, teams from Kosovo, Liechtenstein and Lithuania gave their countries a first-ever representative in the group stage of a UEFA competition. 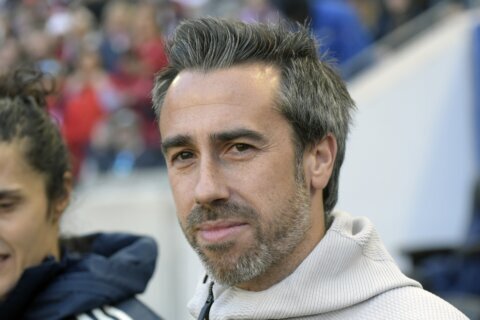