BAKU, Azerbaijan (AP) — Lewis Hamilton is optimistic Mercedes has made progress toward challenging the Formula One leaders and said the “adversity” of struggling to keep up has brought the team closer together.

Ahead of Sunday’s Azerbaijan Grand Prix, the seven-time champion has just one podium finish from seven races, his worst start to a season since 2009, after Mercedes had to redesign a car that started the year with a tendency to bounce and shake at high speed.

“Can I say it’s the best, most exciting journey? No, but it is an experience and it’s bringing the team closer,” Hamilton said Friday. “It’s making us all have to sharpen our tools. The technology is advancing a lot to be able to understand it, and we’re pulling closer than ever before. I guess that’s what happens when you’re faced with adversity, and so there’s lots and lots of positives.”

Hamilton said upgrades the team brought to the Spanish Grand Prix last month have “given us more of a direction to go in and it’s been positive” as he and teammate George Russell try to chase down title contenders Max Verstappen of Red Bull and Charles Leclerc of Ferrari.

Russell is still chasing his first F1 win and warned Mercedes would likely stay behind Red Bull and Ferrari in Azerbaijan and needs more time to develop its car to challenge the top teams.

“The car we had (for the first race of 2022) in Bahrain, that was sort of its maximum potential and we couldn’t really improve it from there on in,” he said. “Sometimes you’ve got to take a small step back to to take three steps forward, and I think we’re in that transitional process at the moment. I think it’ll be a few more races before we start to see us hopefully fighting with Ferrari and Red Bull.”

Points leader Verstappen and Leclerc both suffered disappointment last year in Azerbaijan. The Dutchman’s tire blew at high speed, throwing him into the wall in a dramatic crash, while Leclerc started on pole position but lacked pace and dropped to fourth. That echoes Leclerc’s recent struggles — he has taken pole in each of the last three races but couldn’t convert any of them into wins as Verstappen overtook him in the standings. The last race in Monaco was particularly bitter as Ferrari made the wrong pit stop call and cost him a shot at winning on home soil.

“Obviously in Monaco there was plenty to analyze because we’ve done some mistakes,” said Leclerc, who trails Verstappen by nine points. “What gives me the confidence for the future is that we found the reasons why we did those mistakes as a team. … We just obviously need to focus on ourselves, don’t do any other mistakes. And if we do everything perfect, I’m sure that we can have a great result this weekend.”

Last year’s winner in Baku was Verstappen’s teammate Sergio Pérez, who comes into the weekend on a high after his Monaco victory and a new Red Bull contract. Now a title contender in his own right, 15 points off Verstappen, Pérez said the contract talks didn’t define him as Verstappen’s wingman.

“There’s nothing in my contract that say that I need to finish second or something like that, you know,” he said. “So it was not a topic in the contract at all.” 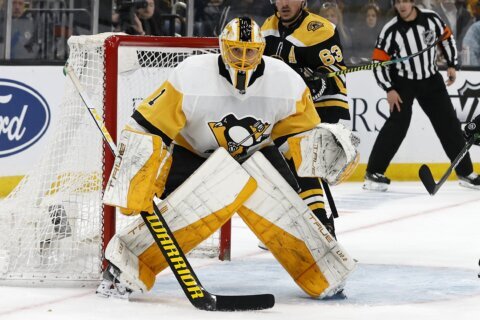