BOSTON (AP) — Brad Marchand had a goal and two assists on Friday night to help the Boston Bruins take their first lead against the Hurricanes all season — and hold onto it for a 4-2 victory over Carolina in Game 3 of their first-round playoff series.

Rookie Jeremy Swayman stopped 25 shots in his first career playoff start after Linus Ullmark allowed eight goals in the first two games, both Hurricanes victories. That followed a regular season in which Carolina swept all three games, outscoring the Bruins 16-1 and never trailing.

Vincent Trocheck and Jaccob Slavin scored for Carolina, and backup goalie Pyotr Kochetkov made 24 saves in his first career playoff start. He took over in Game 2 after starter Antti Raanta was injured in a collision with Pastrnak.

TAMPA, Fla. (AP) — Jack Cambell had 32 saves — including three to protect the lead on a late power play — and Toronto took a 2-1 series lead in the first-round Eastern Conference matchup.

Game 4 in Sunday night in Tampa.

ST. LOUIS (AP) — Kirill Kaprizov had a goal and an assist, Marc-Andre Fleury stopped 29 shots, and Minnesota took a 2-1 lead in the Western Conference playoff series.

Joel Erickson Ek had a goal and an assist, and Jordan Greenway, Mats Zuccarello and Jonas Brodin also scored as the Wild improved to 8-8 all-time in Game 3s. Fleury, playing in a 16th consecutive Stanley Cup playoffs, earned his 92nd career playoff win.

Ryan O’Reilly scored a power play goal and Ville Husso made 28 saves for the Blues. St. Louis lost Torey Krug to a lower body injury early in the first period. Krug is the third Blues defensemen to get hurt in the series.

Game 4 of the best-of-seven series is Sunday afternoon in St. Louis.

Leon Draisaitl had a goal and assist for the Oilers, who lead the first-round series 2-1. He is the third Edmonton player in the past 25 years to score in each of the first three games of a postseason, joining McDavid (2020) and Bill Guerin (1998). Cody Ceci had three assists and Mike Smith made 44 saves.

Anze Kopitar had a goal and an assist while Phillip Danault also scored for Los Angeles, who had a 45-37 advantage in shots on goal. Jonathan Quick allowed four goals and made 13 saves while Cal Petersen gave up four goals while making 16 saves. 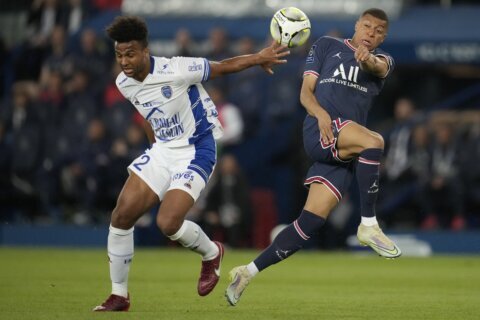