Madrid warps time yet again to stun City at the Bernabéu

BARCELONA, Spain (AP) — When the final whistle blew, Rodrygo kneeled to apparently say a prayer or ask for thanks before joining the celebrations and throwing on a T-shirt reading “Let’s go for the 14th.”

The young Brazilian was trying to absorb how he had etched his name into Real Madrid’s long love story with the European Cup.

Rodrygo’s goals in the 90th minute and in stoppage time had inspired another win for the ages.

The 3-1 victory over Manchester City gave Madrid yet another comeback and set it up for a showdown with Liverpool in the Champions League final on May 28 in Paris.

“I don’t have words for what happened today. God looked at me and said, ‘Today is your day’,” Rodrygo said about his two goals that sent Wednesday’s match into extra time at the Santiago Bernabéu.

City was moments away from returning to the final before the substitute forward stunned the English team with his back-to-back goals, inspiring Madrid to victory like a bruised boxer who lands a knockout combination.

Madrid, which had trailed City ever since minute 2 of their first-leg match in Manchester, was finally level.

Pep Guardiola’s team still had another half hour of extra time, but it never recovered. It seemed inevitable that once resuscitated there was no stopping Madrid. And fittingly it fell to Karim Benzema, the man who had carried Madrid to the final four with hat tricks in the previous two rounds, to earn and convert the decisive penalty that clinched a 6-5 aggregate victory.

“I couldn’t hear what my teammates were saying to me because I couldn’t believe what was happening,” the 21-year-old Rodrygo said about the mayhem that erupted after his goals. “We were dead, and then what happened was what happened.”

Indeed. Surely Guardiola and his players were asking themselves the same question: What had just happened?

Perhaps City can take solace in that Paris Saint-Germain and defending champion Chelsea were also zombified by whatever wizardry Madrid somehow conjures up at the biggest moments of the biggest games.

All good teams occasionally score against the flow of the game. But most, and especially this City engineered by soccer’s top stylist in Guardiola, need to dominate stretches of play to produce lots of goals.

Not Madrid. Not when it plays in front of its fans.

The clock becomes meaningless for Madrid at home. The 13-time European Cup winners produce those magic moments when time is suddenly compressed, the crowd roars, opponents freeze, and the goals just flow in quick succession.

Ask PSG how Benzema was able to score three goals in less than 20 minutes of the second leg of their round-of-16 series that Kylian Mbappé’s team had once controlled to advance 3-2 overall.

Ask Chelsea how it was they could have the momentum going into the final period of their quarterfinal in Spain’s capital only for Rodrygo and Benzema to score late for a 5-4 aggregate win in extra time.

City entered the second leg against Madrid with the advantage after coming out on top of their 4-3 shootout last week. Riyad Mahrez’s goal in the 73rd minute appeared to give it the cushion it needed to avoid any last-minute scares. Jack Grealish then went oh-so-close to padding that lead.

But that just set the scene for Rodrygo, who coach Carlo Ancelotti had sent on for a tired Toni Kroos, looking to spark his attack.

First he slipped to the near post to tap in a cross knocked to him by Benzema just when City suffered a momentary drop in concentration. Seconds later, with Madrid seizing the moment, came his header when the slight forward managed to open up a bit of space in a packed area to push in a cross by Dani Carvajal flicked on by Marco Asensio.

Once again, faith had trumped reason at the Santiago Bernabéu.

“The whole world thought the game was nearly over — it was a little detail, a good combination, the goal of Rodrygo, and from there we put in all the energy we had. You need a bit of luck,” Ancelotti said.

Spanish sports daily Marca summed it up with its front-page headline: “Let God come down and explain it.”

While Ancelotti embraced his son and assistant Davide Ancelotti, Guardiola was left to run a hand over the top of his head and put on his best sportsman’s grin as he shook hands with the players.

The Catalan coach had just witnessed his grand design to finally win a European Cup for City succumb before that gift that Madrid has of making its players believe that by donning the all-white shirt they are destined for glory. Only the golden years of Lionel Messi’s Barcelona, which Guardiola helped forge, was able to somewhat dim that mystique.

“In that moment we didn’t have the feeling we were in trouble,” Guardiola said about the loss. “(But) they score a goal at the end. They have done it many times in their history.” 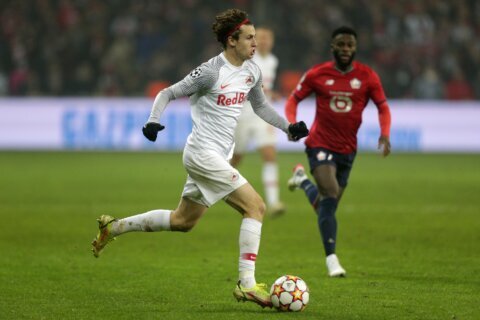 Aaronson to join Leeds from Salzburg with 5-year contract