BARCELONA, Spain (AP) — Some Barcelona fans are expected to gather near the Camp Nou Stadium before the team’s Spanish league match on Monday to protest against the influx of Eintracht Frankfurt supporters for their Europa League game last week.

Only about 5,000 tickets were sold to the visiting fans but nearly 30,000 made it to the Camp Nou to see their team defeat the Catalan club and advance to the semifinals of the second-tier European competition.

The Barcelona fan group Nostra Ensenya said in a statement Sunday that the local supporters felt humiliated and accused the club’s officials of putting them in danger.

Barcelona President Joan Laporta said after the match that what happened was embarrassing.

The club had already said it would investigate how so many German fans were able to buy tickets in sections reserved for the Barcelona supporters.

It would look into the possibility that some club members re-sold their tickets, and if the Germans were able to purchase entry on the internet despite being abroad.

“When I left the hotel I saw that something wasn’t right,” Barcelona coach Xavi Hernández said Sunday. “It didn’t feel like we were at home.”

The Eintracht fans filled the streets around the Camp Nou before the game and stayed to celebrate with their players long after the final whistle in the 3-2 win that secured the team’s spot in the last four as a result of a 4-3 aggregate result.

Barcelona, second in the Spanish league, hosts relegation-threatened Cádiz on Monday. The Catalan club is 12 points behind leader Real Madrid, which visits third-place Sevilla on Sunday. 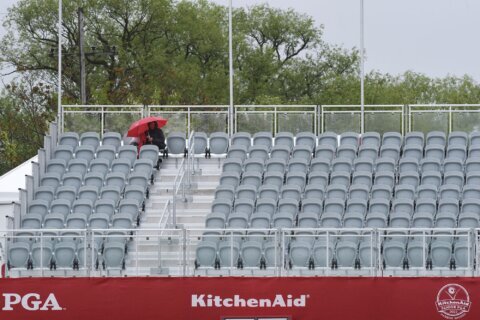