Shiffrin returns to rigorous training with her back on mend

COPPER MOUNTAIN, Colo. (AP) — Mikaela Shiffrin is once again putting her mending back through extreme tests: double training sessions filled with twists, turns and crouching into a tuck position to generate more speed.

Outside of a little stiffness — “Nothing that is not manageable,” the two-time Olympic gold medalist said — everything has checked out just fine. Another good sign is that Shiffrin was back out there at the U.S. ski team’s speed center at Copper Mountain on Friday, 24 hours after her first double dose of practice on the slopes in weeks.

It’s a long way from when her training was hampered by a back ailment she likened to a muscle spasm or strain. She remains intent on not sitting out any upcoming World Cup races.

One caveat: She will be careful. There are big goals ahead, after all, as the Beijing Games approach in February.

“I’m moving in the right direction. So that’s comforting in a way,” Shiffrin said in response to questions from The Associated Press. “It (the back) still gets aggravated sometimes, but that was a really, really big step forward (double training sessions). I was quite psyched with it.”

Shiffrin certainly turned in a full day on the slopes Thursday. On a cold morning, she went through a lengthy super-G training session. After a quick stop inside the resort to warm up a bit, stretch out her back, eat a sandwich and change equipment, she returned to the hill for slalom runs.

One thing her back is still getting used to is the stress generated by the tuck position.

“Different kind of load,” said Shiffrin, who worked on downhill and slalom Friday. “It’s just kind of adding variability back into the training program. That was awesome, awesome training.”

For now, her schedule looks like this: Slalom races next weekend in Levi, Finland, followed by a Nov. 27-28 stop in Killington, Vermont. Then speed events at Lake Louise in Canada in early December.

“We are still going to take it day by day and adjust the plan if we have to,” the 26-year-old American said. “I’m doing a lot of work on snow, but also off the snow, to do everything I can to make sure that we don’t have to adjust it. But at the end of the day, you never really know. So we’re staying flexible and open-minded and doing everything we can to keep that plan our ‘A’ plan.”

Shiffrin cautioned she wouldn’t “necessarily say that I feel ready to race” in Levi. Then again, she added, that’s not unusual — she didn’t feel ready before her season-opening giant slalom win in Sölden, Austria, on Oct. 23.

She always feels like there’s more work that can be done, which has helped drive her to 70 career World Cup wins, three World Cup overall titles and three Olympic medals.

“I could definitely use a lot more reinforcement,” Shiffrin said. “Unfortunately, there’s just not really a whole lot of time for that. … I don’t really expect to feel ready to race. At this point, I never actually feel ready. 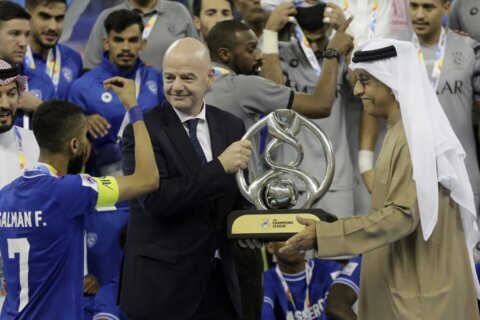