CHISINAU, Moldova (AP) — When Sheriff Tiraspol became the first club from the former Soviet state of Moldova to qualify for the Champions League last month, it seemed like the feel-good story of the day.

Just qualifying for the Champions League was in itself a huge victory. But the team from the breakaway region of Transnistria, a disputed territory unrecognized by the international community, got off to a winning start — a big one.

Sheriff stunned 13-time European champions Real Madrid on Tuesday night with a 2-1 victory in one of the biggest upsets in Champions League history. Sheriff had beaten Shakhtar Donetsk in its Champions League group stage debut two weeks ago.

But how did Sheriff, a largely unknown club based in Transnistria’s de facto capital of Tiraspol, surge to such success?

A lot has to do with its controversial owners’ deep pockets.

Moldova, a country of 3.5 million, Europe’s poorest, sandwiched between Romania and Ukraine, proclaimed its independence from the Soviet Union on August 27, 1991.

In the aftermath of the collapse of the Soviet Union and Transnistria’s war of independence from Moldova in 1992, two former KGB agents formed a company that became what is today the Sheriff Company, a conglomerate that dominates the breakaway region’s entire private economy.

There are few local business sectors that it doesn’t have its hand in.

“Sheriff is a holding company encompassing the most lucrative industries in the region,” he told The Associated Press. “The soccer team is a sort of prestige thing for the holding.”

The club, which was founded just over two decades ago, draws from the company’s vast wealth, which by comparison dwarfs the paltry funding of most other Moldovan clubs. Since 1999, Sheriff has dominated Moldova’s league — winning 20 titles in 22 attempts.

Unlike most other Moldovan soccer clubs, Sheriff boasts a modern stadium that was built in Tiraspol at a staggering cost of $200 million. By contrast, the majority of Moldova’s clubs make do with antiquated facilities.

“They have a tremendous training camp with around 20 football pitches, two stadiums and one covered stadium,” Cristian Jardan, a Moldovan soccer journalist, told The Associated Press. “One of the best condition in the region, not just Moldova.”

Jardan said that Sheriff’s resources make it so that no one locally “has a chance to compete with them” and the lack of competition has stifled interested in the domestic soccer league.

The unrecognized state, officially named the Pridnestrovian Moldavian Republic, has its own currency and flag. It also has a reputation for widespread organized crime and corruption.

Sheriff has used its deep pockets to invest big in foreign players, which make up a large majority of the roster and drive its oversized Champions League success.

“Even though they have one of the biggest and the most modern and equipped academies, they don’t produce players, not even local ones, from Tiraspol or other cities in the region,” Jardan said.

With two wins, Sheriff sits atop its Champions League group. It faces another European powerhouse — Inter Milan — next month. 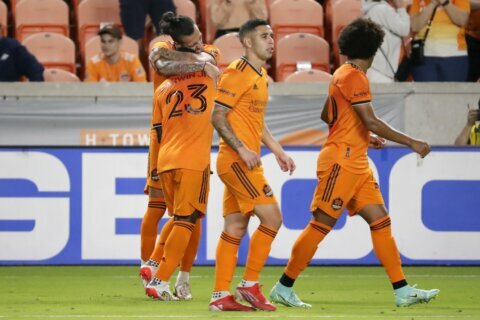