BERLIN (AP) — Hertha Berlin climbed out of the Bundesliga’s relegation zone on Thursday with a 3-0 win over visiting Freiburg in its second game following a coronavirus outbreak at the club.

Krzysztof Piatek and Peter Pekarik’s first-half goals and a late strike from Nemanja Radonjic were enough for Hertha to move ahead of Werder Bremen and Arminia Bielefeld on goal difference having played a game less.

Hertha was facing a punishing schedule of six games in 20 days when it returned from a two-week quarantine period by playing away at Mainz on Monday. But four points from two games have eased the ambitious club’s relegation worries ahead of Sunday’s visit from Bielefeld.

“The team is growing together. You have to work very hard and do a lot for that,” Hertha coach Pál Dárdai said of his team’s quest to stay up. “It seems as if the egos are being put to the side. Everyone is digging in, just like a family. And that’s how we’ll do it.”

Hertha’s rivals have three games remaining. Hertha and already-relegated Schalke have four, including their postponed game next Wednesday.

Piatek scored from a difficult angle on a rebound in the 13th minute after Freiburg goalkeeper Florian Müller stopped Jordan Torunarigha’s initial effort from distance. Radonjic then crossed for Pekarik to make it 2-0 in the 22nd.

The Serbian winger sealed the win with his first Bundesliga goal -– a fine individual effort to go past a defender after a long run -– in the 85th.

The only bad news for Hertha was an injury to French midfielder Matteo Guendouzi. The club said at halftime that he had to go off with a suspected metatarsal fracture. If confirmed, it would rule the 22-year-old out of the rest of the season. Guendouzi is on loan at Hertha from Arsenal.

The Latest: UEFA to investigate claims against Arnautović 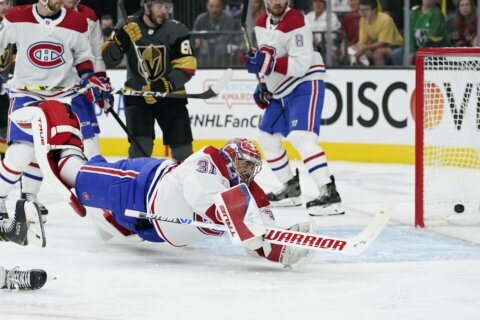