PITTSBURGH (AP) — Sidney Crosby and Bryan Rust each scored their 20th goal of the season, and the Pittsburgh Penguins beat the New Jersey Devils 4-2 on Saturday.

Crosby got an empty-netter with 0.1 seconds to play. His goal came following a tense net-mouth scramble in which the Devils nearly tied the game.

Crosby surpassed Evgeni Malkin and Mario Lemieux for the most 20-plus goal seasons in franchise history.

Jeff Carter and Jared McCann also scored for the Penguins, who completed a three-game series sweep of the Devils. Casey DeSmith stopped 34 shots.

Mike Hoffman and Ivan Barbashev also scored for the Blues, and Jordan Binnington made 28 saves.

St. Louis had lost five straight against the Avalanche since winning at Colorado on Jan. 13 in the season opener for both teams.

Nathan MacKinnon and Cale Makar each had a goal and two assists for Colorado, which had won five in a row. Gabriel Landeskog also scored and Devan Dubnyk made 25 saves.

Evgeny Kutznetsov had a goal and two assists, and Nic Dowd, Garnet Hathaway and T.J. Oshie also scored for the Capitals. Washington remained in first place in the tight East Division, one point ahead of second-place Pittsburgh. The Islanders are in third, two points behind the Penguins, and three ahead of Boston.

After a turnover in the Panthers’ end, Barkov raced the length of the ice and fired a shot that trundled in for his 22nd goal.

In winning for just the second time (2-4-2) against Carolina, the Panthers pulled within one point of the Hurricanes. Florida has seven games left in the regular season, Carolina nine.

Florida’s MacKenzie Weegar had a goal and two assists, Gustav Forsling and Alex Wennberg scored, and Chris Driedger made 16 saves.

Dallas outshot Detroit by more than three times and had the puck for much of the game, but trailed after Dennis Cholowski scored late in the first period until Mark Pysyk made it 1-all early in the third.

Benn took advantage of a turnover by Detroit in the extra period, carried the puck into the left circle and lifted a shot over Jonathan Bernier’s blocker.

Anton Khudobin stopped 16 shots for the Stars and Bernier had a season-high 50 saves.

Nikolaj Ehlers scored for Winnipeg, and Connor Hellebuyck stopped 33 shots. The Jets have lost three straight for the first time this season.

LOS ANGELES (AP) — Phil Kessel had a goal and an assist, Darcy Kuemper made 26 saves for his second shutout of the season, and Arizona beat Los Angeles.

John Hayden, Lawson Crouse and Jakob Chychrun also scored, helping the Coyotes remain fourth in the West Division. Arizona is one point ahead of St. Louis, which beat Colorado 5-3 earlier in the day, for the final playoff spot.

It was Kuemper’s 20th career shutout.

Cal Petersen made 36 saves for the Kings, who fell seven points behid the Coyotes.

Marcus Foligno and Jared Spurgeon also scored in the first period as the Wild jumped on top early to join Vegas and Colorado as three of the four playoff teams in the West Division following their sixth straight win.

Logan Couture, Evander Kane and Joachim Blichfeld scored in the third period for the Sharks, who lost their eighth straight. Martin Jones allowed three goals on eight shots in the first period before getting pulled for the eighth time in 32 starts this season.

Stephenson had the first three-point night of his career, while Shea Theodore and William Karlsson got goals against their former team as the Knights rolled toward their fourth straight playoff appearance. William Carrier also scored for Vegas, which completed the season series with seven wins over Anaheim in eight meetings.

Robin Lehner made 23 saves in his second win at Honda Center in nine days.

Sam Steel scored for the Ducks, who have lost four straight and nine of 12. John Gibson stopped 26 shots for Anaheim, but the goalie is winless in eight consecutive home starts since March 8.

Nate Schmidt and Brock Boeser also scored for Vancouver, and Bo Horvat had two assists. Braden Holtby had 26 saves, including a penalty shot.

Evgenii Dadonov had a goal and an assist, and Colin White also scored for the Senators, who snapped a three-game winning streak.

Matt Murray started and stopped 12 of 13 shots before leaving wit an injury early in the second period. Marcus Hogberg had 18 saves in relief.

The teams continue their four-game series Monday and Wednesday night at Ottawa.

Milan Lucic, Brett Ritchie and Rasmus Andersson also scored and Jacob Markstrom made 30 saves to improve to 6-1 against Montreal this season. The Flames opened the three-game set Friday with a 3-2 victory.

Tyler Toffoli and Nick Suzuki scored for the Canadiens. They hold the fourth and final playoff spot in the North Division, four points ahead of Calgary with a game in hand.

Cayden Primeau made 29 saves in his season debut and third career start for Montreal. He’s the son of former NHL player Keith Primeau.

The teams will close the series Monday night in Calgary. 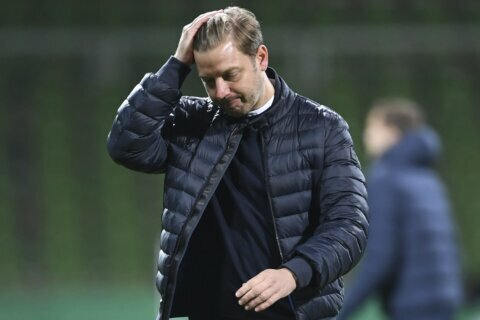