BERLIN (AP) — Cologne boosted its chances of Bundesliga survival with a 3-2 win over relegation rival Augsburg on Friday.

Ondrej Duda scored twice in the first half as Cologne jumped above Hertha Berlin into the relegation playoff place, four points behind Augsburg, to start the 31st round. Three rounds remain after this weekend, but Hertha will have played three games less due to a two-week quarantine period following a coronavirus outbreak at the club.

Hertha will return on May 3 for a punishing schedule of five games every three days before the last round a week later.

Duda opened the scoring in spectacular fashion in the eighth minute, meeting Ellyes Skhiri’s cross from a volley outside the penalty area to send the ball inside the top right corner.

Florian Kainz grabbed the visitors’ second goal in the 23rd, and 10 minutes later Duda made it 3-0 with another fine strike inside the right post.

Augsburg coach Heiko Herrlich made two changes before halftime, then another at the break.

It seemed to work as substitute Robert Gumny pulled one back in the 54th, and eight minutes later Ruben Vargas scored Augsburg’s second goal.

But Cologne held on for its second win in three games under new coach Friedhelm Funkel. Funkel’s team defeated second-placed Leipzig on Tuesday. 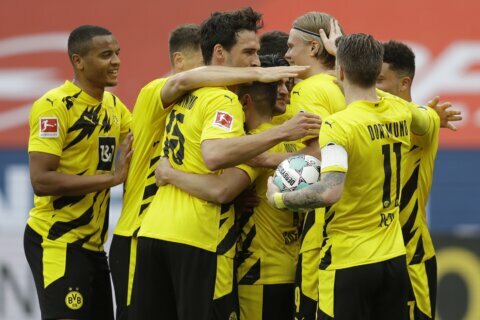