Tiger Woods says it was "touching" to see fellow golfers paying tribute to him by wearing his signature red and black colors during the final round of the WGC-Workday Championship.
Listen now to WTOP News WTOP.com | Alexa | Google Home | WTOP App | 103.5 FM

Tiger Woods said it was “touching” to see fellow golfers paying tribute to him by wearing his signature red and black colors during the final round of the WGC-Workday Championship in in Bradenton, Florida, on Sunday. Woods was seriously injured in a rollover car crash last week.

“It is hard to explain how touching today was when I turned on the tv and saw all the red shirts,” he wrote on Twitter. “To every golfer and every fan, you are truly helping me get through this tough time.”

Players wore red shirts and black slacks at Concession Golf Course in support of Woods who is recovering in the hospital.

Colin Morikawa, 24, won the tournament, becoming the only other player besides Woods to win a major championship and World Golf Championship before the age of 25. Morikawa, who said he didn’t get the red shirt in time, talked about how important Woods is for him following his victory.

“Tiger means everything to me,” Morikawa said. “Yes, he had the crash and thankfully, he is alright and hopefully, he makes a quick and great recovery. But I think we don’t say ‘thank you’ enough, so I want to say thank you to Tiger. Because sometimes you lose people too early. Kobe. I lost my grandpa about a month ago and you don’t get to say thank you enough. So, thank you guys.”

The 45-year-old golf legend sustained “significant” leg injuries in the crash in Los Angeles, local officials said. He was taken to a local hospital, where he had successful emergency surgery.

Los Angeles County Sheriff Alex Villanueva said investigators are treating the crash as “purely” an accident. Villanueva said there were no initial signs that Woods was impaired.

Woods, widely considered one of the greatest golfers of all-time, has 82 career PGA Tour wins, including 15 major championships. 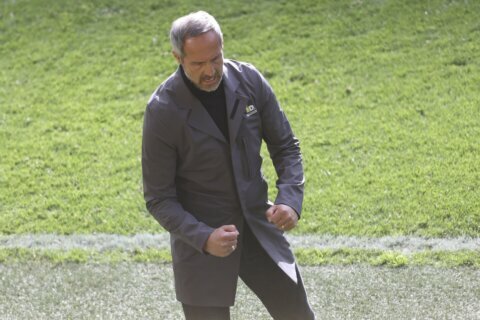