ST. PAUL, Minn. (AP) — Russian rookie Kirill Kaprizov had his first NHL hat trick and Cam Talbot made 25 saves for his first shutout of the season in the Minnesota Wild’s 4-0 victory over the Arizona Coyotes on Friday night.

Kaprizov opened the scoring 5:47 into the third period and added his second just over two minutes later for his first multi-goal game. He scored his third in the final seconds after Jonas Brodin added an empty-netter.

Kaprizov has four goals in the last two games and 10 overall. The 23-year-old leads NHL rookies in scoring.

Adin Hill made 28 saves in his second start of the season for Arizona.

The teams will meet again in St. Paul on Sunday and Tuesday night.

EDMONTON, Alberta (AP) — Connor McDavid had a goal and two assists and Edmonton beat Ottawa to sweep the three-game series and improve to 7-0 against the Senators this season.

McDavid needed just 10 seconds after the opening faceoff to score his 17th of the season, beating Joey Daccord on the game’s first shot. McDavid pushed his NHL-leading points total to 51 in 29 games.

Leon Draisaitl and Tyler had a goal and an assist, Tyson Barrie, Darnell Nurse and Gaetan Haas also scored and Mike Smith made 23 saves.

Edmonton improved to 18-11-0 to take sole possession of second in the North Division, four points behind Toronto.

ST. LOUIS (AP) — Reilly Smith scored on a power play at 2:38 of overtime to lift Vegas past St. Louis.

Smith connected on a one-timer off Jonathan Marchessault’s pass.

Mark Stone, Tomas Nosek, Alec Martinez and Marchessault also scored for Vegas. Marc-Andre Fleury, playing after being removed from COVID-19 protocol due to a false positive, made 19 saves.

The teams will complete the two-game set Saturday.

ANAHEIM, Calif. (AP) — Devan Dubnyk made 34 saves for his 33rd career shutout, Tomas Hertl had a goal and an assist in his return to San Jose’s lineup and the Sharks dominated Anaheim.

Kevin Labanc had a goal and two assists, Timo Meier and Evander Kane also had a goal and an assist, and Erik Karlsson and Fredrik Handemark added goals,

Hertl missed six games after being placed on NHL’s COVID-19 list on Feb. 24.

DENVER (AP) — Mikko Rantanen had a goal and an assist, Philipp Grubauer stopped 18 shots for his fourth shutout of the season and Colorado beat Los Angeles.

Calvin Petersen made a career high 44 saves for the Kings. 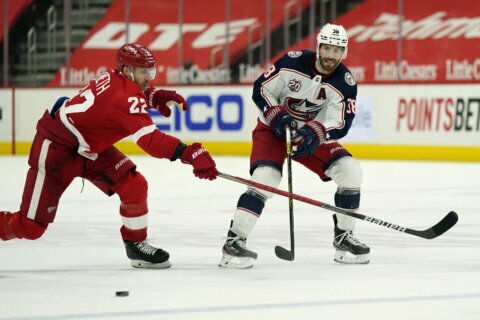 Avs bring back defenseman Patrik Nemeth in trade with Wings