MADRID (AP) — Sevilla strengthened its hold on fourth place in the Spanish league with a 1-0 win over Real Betis in the Seville derby on Sunday.

Youssef En-Nesyri scored a 27th-minute winner to give Sevilla a six-point advantage over fifth-place Real Sociedad in the fight for the final Champions League spot. Sociedad earlier lost at Granada.

It also ended the team’s four-game winless streak in all competitions. Sevilla was coming off its elimination in the round of 16 of the Champions League by Borussia Dortmund.

“The team needed this victory. It keeps us near the top and close to reaching our goal,” Sevilla midfielder Joan Jordan said. “It was a special game for our fans. It’s always good to win a derby.”

En-Nesyri scored the winning goal with an angled shot from the right side of the area after getting past the goalkeeper inside the box.

Sixth-place Betis, which had a goal disallowed for offside in the 72nd, had won four in a row in the league. It could have moved within three points of Sevilla with a win. Betis trails Sociedad by three points.

Atlético Madrid saw its lead cut to six points on Saturday after it drew 0-0 at Getafe and second-place Real Madrid rallied to beat Elche 2-1 at home.

Barcelona can move within four points of Atlético if it beats last-place Huesca at home on Monday.

The result moved Granada to eighth place and left Sociedad in fifth. The Basque Country club had entered the match with a chance to overtake Sevilla for fourth in the final Champions League qualification spot.

Sociedad hadn’t lost in the league since a 3-2 defeat at Sevilla in January, with four wins and three draws since.

Villarreal beat Eibar 3-1 to end an eight-game winless streak in the league. It remained in seventh place.

Eibar’s winless run in all competitions reached 12 games, keeping the team second to last in the 20-team standings.

Earlier, Celta Vigo and Athletic Bilbao drew 0-0 in Vigo in a result that left the teams midtable tied with 34 points from 27 matches. 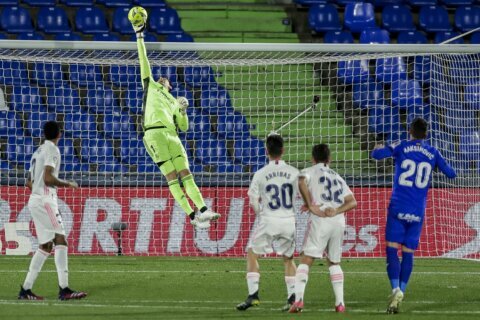 Super League: How would the breakaway competition work?