Victory keeps Lille top ahead of Lyon and PSG, who also win

PARIS (AP) — United States forward Timothy Weah and Canada striker Jonathan David both scored as Lille won 3-0 at Bordeaux on Wednesday to stay top of the French league ahead of Lyon and Paris Saint-Germain.

The standings remained unchanged as the top four sides all won, with Lille still two points ahead of Lyon and three clear of defending champion PSG in third spot.

A goal from Brazilian midfielder Lucas Paqueta midway through the first half earned Lyon a 1-0 win at relegation battlers Dijon, while PSG beat last-place Nimes 3-0 at home but rode its luck at times as the visitors wasted chances.

Wingers Angel Di Maria, Pablo Sarabia netted in the first half while Kylian Mbappe added the third with his league-leading 15th goal midway through the second.

A brace from Mbappe’s France teammate Wissam Ben Yedder gave fourth-place Monaco a 2-1 home win against Nice in the French Riviera derby, for a sixth straight victory and 22 points from the past 24.

After grabbing the winner last weekend, Turkey midfielder Yusuf Yazici netted the opener in the 53rd minute after forward Jonathan Bamba sprinted clear and pulled the ball back to him.

The 20-year-old Weah — son of Liberia president and ex-soccer star George Weah — doubled the lead in the 65th following a fast counterattack after a Bordeaux corner. It was Weah’s third league goal this season and first since Dec. 23 against Montpellier.

Then the 21-year-old David, who like his teammate Weah was born in New York, finished confidently in the 88th after Jonathan Ikone clipped a classy pass behind Bordeaux’s defense.

Nimes looked comfortable until midfielder Lamine Fomba played a needless pass back from near halfway and the ball landed to Di Maria, who sprinted clear to score in the 17th minute.

Di Maria then set up Sarabia’s close-range header in the 35th, but Fomba could have made amends for his mistake near the end of the half only to head at goalkeeper Sergio Rico from point-blank range.

After Nimes created problems for PSG’s creaky defense after the break, Mbappe added the third with a fine curling shot from the left of the penalty area in the 67th.

Nimes could have scored again with a couple of late chances.

Marseille raced into a 2-0 lead at Lens, showing it could cope without suspended coach Andre Villas-Boas

Winger Florian Thauvin scored his 85th career goal for Marseille, while Arkadiusz Milik got his first since joining on loan from Italian side Napoli.

But Lens showed its resilient streak with second-half goals to earn a 2-2 draw against Marseille, which next hosts PSG on Sunday.

Meanwhile, 18th-place Lorient continued its fight against relegation by securing a 1-1 draw at fifth-place Rennes.

Winger Martin Terrier put Rennes ahead early on but substitute Quentin Boisgard equalized in the 82nd for Lorient, which beat PSG 3-2 last weekend and Dijon by the same score a few days earlier. 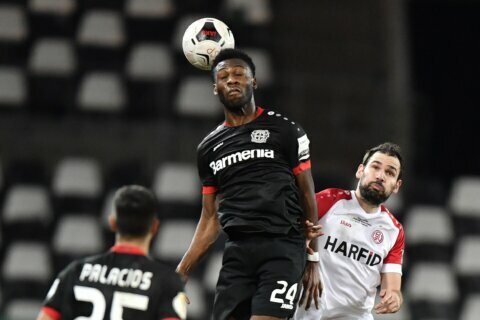