Inter dominated but took until the 69th minute to double its lead, through Matteo Darmian. Substitute Alexis Sánchez sealed the win to ensure Antonio Conte’s side remained four points above second-place AC Milan, which won 2-1 at Roma.

It was Genoa’s first league defeat since early January and left it 13th, eight points above the drop zone.

Inter was bidding for a fifth straight league win and it got off to the perfect start when Nicolò Barella sent a ball through to Lukaku, who played a quick one-two with Lautaro Martínez before drilling into the bottom left corner.

The Nerazzurri wasted a number of chances and Barella also hit a long-range stunner off the crossbar in the 17th.

Inter finally doubled its lead when Lukaku drew defenders toward him before setting up an unmarked Darmian.

Sánchez was brought on in the 76th and the Inter forward immediately scored as he turned in the rebound after Genoa goalkeeper Mattia Perin parried Lukaku’s effort. The goal was originally ruled out for offside but was awarded on video review.

Milan kept up the pressure on city rival Inter despite having goals ruled out and hitting the woodwork.

Fikayo Tomori and Zlatan Ibrahimović both had goals ruled out for offside for Milan and Simon Kjær hit the crossbar before the visitors broke the deadlock three minutes from halftime when Franck Kessié converted a penalty after Federico Fazio had fouled Davide Calabria.

Henrikh Mkhitaryan had a goal ruled out for Roma, which leveled five minutes after the break thanks to Jordan Veretout’s curled effort.

But Ante Rebić restored Milan’s lead in the 58th with an impressive swiveling effort into the far bottom corner.

Atalanta struggled before breaking down Sampdoria 2-0 to move fourth in Serie A.

Atalanta risked a lot in the early stages and also needed a goal-line clearance before Ruslan Malinovskiy gave it the lead five minutes before halftime.

Atalanta had another goal disallowed for offside but Robin Gosens all but sealed the match in the 70th.

Atalanta is below third-place Juventus on goal difference and two points above Roma, in fifth.

Napoli was a point further back after beating Benevento 2-0.

Dries Mertens made his first start for more than two months and scored the opening goal when he turned Matteo Politano’s deflected attempt into the back of the net in the 34th minute.

Piotr Zieliński thought he had doubled Napoli’s lead moments later but his effort was ruled out for an offside in the buildup.

Napoli did get its second midway through the second period when the ball went into the back of the net off Politano, following a series of deflections.

The only negative note for Napoli was the sending off of defender Kalidou Koulibaly for a second bookable offense, nine minutes from time.

New Cagliari coach Leonardo Semplici ended his side’s 16-match winless streak in all competitions as he steered the Sardinian team to a 2-0 win at bottom club Crotone.

Cagliari had to see out the final 15 minutes with 10 men after Charalampos Lykogiannis was sent off.

Cagliari inched to within two points of safety while Crotone remained eight points below 17th-place Torino. 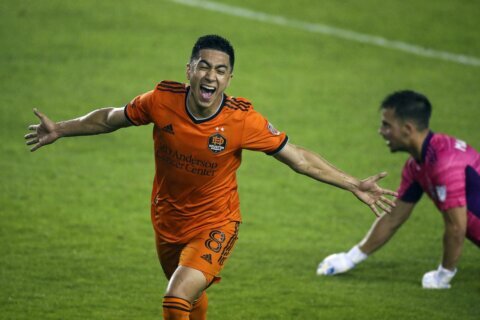