MADRID (AP) — Another outstanding night by Luis Suárez wasn’t enough to keep Atlético Madrid from missing a chance to increase its lead in the Spanish league.

An Atlético team depleted by the coronavirus conceded late in drawing with Celta Vigo 2-2 at home despite another Suárez double on Monday.

Facundo Ferreyra scored an 89th-minute equalizer for the visitors, who took an early lead before Suárez added to his scoring streak with a goal in each half. His league-leading tally was up to 16.

The Uruguay striker, who arrived after being let go by Barcelona at the end of last season, has found the net seven times in his last four games.

The draw moved Atlético eight points clear of Barcelona and Real Madrid with a game in hand. The lead would have stayed at 10 points had it held on to the victory.

“We know that we have to win these games at home, and today we allowed them to equalize almost in the last play of the match,” Atlético captain Koke Resurrección said.

Atletico was missing several key players because of positive COVID-19 tests, including João Félix and Yannick Carrasco. Two new positive results were announced hours before the game at Wanda Metropolitano Stadium, for Héctor Herrera and Thomas Lemar. Moussa Dembélé and Mario Hermoso also were out because of the virus.

Celta, winless in seven straight matches in all competitions, stayed in 10th place. It opened the scoring with a header by Santi Mina in the 13th.

The 34-year-old Suárez, who also missed a few matches after testing positive for the coronavirus, got his goals off his first two shots on target at Metropolitano.

“We have been conceding too many goals early in the matches,” Koke said. “We have to improve in that area if we want to keep fighting for the title.”

Atlético recently also had to come from behind against Eibar and Valencia. Simeone’s team has won every league match since losing at Real Madrid 2-0 in December, though it was eliminated by third-division club Cornellà in the second round of the Copa del Rey.

Atlético’s next game is at eighth-placed Granada on Saturday. Celta hosts Elche on Friday. 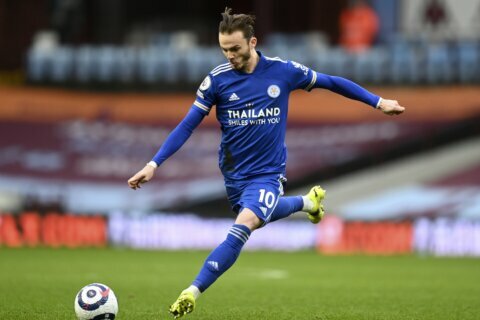